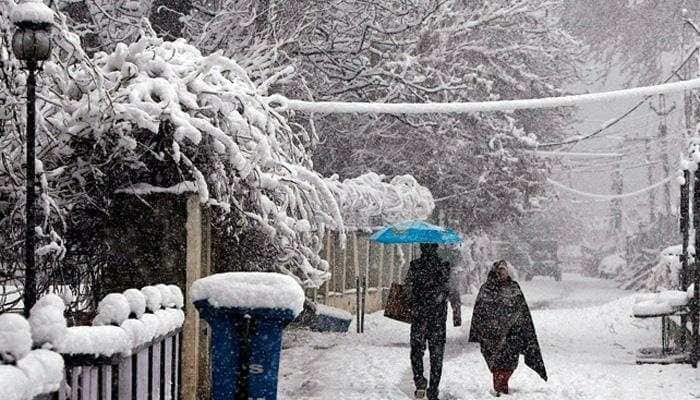 Srinagar: Kashmir valley braces for snowfall from Saturday as the minimum temperature improved even as cold with overcast sky and hazy weather conditions continue to prevail on Thursday.

Meteorological Centre Srinagar forecast of generally cloudy sky at most places of J&K and hazy in Valley on Thursday.

The weather will remain cloudy on December 9-10 with intermittent Light to Moderate rain at many places of Jammu & plains of Kashmir.

Light snow (1-2 inches) likely (50% chance) in plains of Kashmir during December 9 night to December 10 forenoon whereas higher reaches may receive 9-10 inches of snow. There is ?NO? forecast of any Major Snow during this spell, the MeT office said.

The MeT has also issued an advisory stating that there may be temporary disruption in surface transportation over Sinthan Top, Mughal Road, Razdan pass, Bandipora-Gurez and Zojila on Srinagar-Ladakh highway during December 9-10.

Srinagar the summer capital of Jammu and Kashmir continued to reel under intense cold with overcast sky and hazy weather conditions on Thursday. The night temperature witnessed an improvement was recorded at minus 2.8 degree Celsius against the minus 3.0 degree Celsius recorded the previous night.

The temperature was still minus 2.2 degree below normal during this period of the season.

Tourist hot spot of Pahalgam in south Kashmir remained the coldest place in the Kashmir valley on Thursday with a low of minus 3.6 degree Celsius against minus 5.6 degree Celsius recorded a day ago.

Qazigund on Srinagar-Jammu national highway had a low of minus 3.0 degree Celsius, Kukernag minus 1.8 degree Celsius and frontier Kashmir district of Kupwara was recorded minus 2.5 degree Celsius on Thursday, MeT office said.