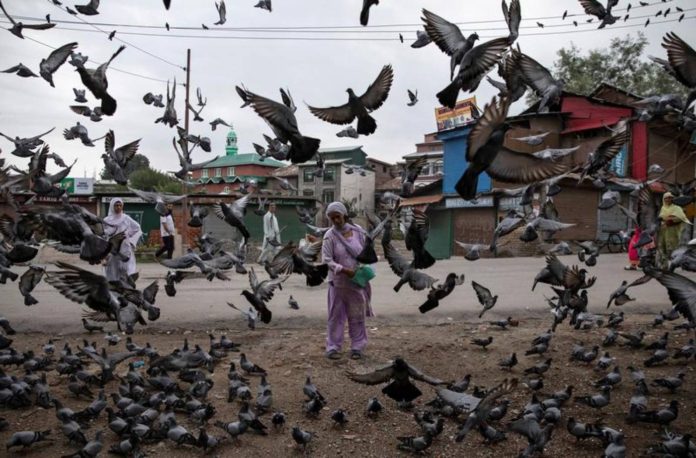 NEW DELHI: At 75 years old, Zareef Ahmad Zareef has been witness to several major events that have shaped Kashmir – for the worse, he says – since it became part of India in 1947.

Now, the historian and poet worries for the future of Kashmir’s culture and its people, after India passed a new law in May that allows non-locals to become permanent residents of the Muslim-majority territory.

“Our Kashmir is a garden. The new laws have thrown the doors open for plunderers to ruin it,” said Zareef in a phone interview from Srinagar, Kashmir’s main city.

“The days are not far when we will be left with no job opportunities or economic resources, including land and forests,” he added. “Kashmiris will become second-class citizens in their own homeland.”

The law makes it possible for people from outside Kashmir to become permanent residents, sparking fears among locals that non-locals will get priority when it comes to housing, jobs and education.

It follows India’s removal of special status for the state of Jammu and Kashmir in August 2019, which opened the door for non-Kashmiris to buy land and property, get government jobs and attend institutes of higher education.

Those receiving domicile certificates include war refugees from Pakistan, Gurkha soldiers from Nepal who had served in the Indian army and marginalised groups such as sanitation workers from the state of Punjab, noted Haroon Reshi, a freelance journalist based in Srinagar.

“Our distinct social and cultural identity, whether it’s our languages or traditions – everything is in danger,” Reshi told the Thomson Reuters Foundation.

The office of Kashmir Divisional Commissioner Pandurang K. Pole did not respond to several requests for comment.

Speaking to reporters this month, Girish Chander Murmu, lieutenant governor for Jammu and Kashmir, said the aim of the law is to encourage investment in the region.

“Our one-point agenda is the development and creating (job) opportunities for the youth. Our target is a prosperous Jammu and Kashmir,” he said.

In another move officials said would generate jobs and boost development, the Indian administration on July 24 approved setting aside 488 hectares (1,205 acres) of state land to build industrial estates in about 35 locations across the region.

Raja Muzaffar Bhat, chairman of the J&K RTI Movement, an anti-corruption charity, described the decision as “disastrous” in a statement on Monday, saying the government should instead focus on establishing more agricultural land and creating green jobs.

FEARS FOR LAND AND PROPERTY

Kashmir is claimed in full by India and Pakistan and both rule parts of it. India’s portion has been plagued by separatist violence since the late 1980s.

The new domicile rule states that any Indian national who has lived in Jammu and Kashmir for at least 15 years or has studied for seven years and taken certain exams can become a permanent resident.

India’s government has said applications must be issued or rejected within 15 days and has introduced a fine of 50,000 rupees ($670) to be deducted from the salary of any official in the territory who delays the process.

Zareef, the historian, said one fear among many Kashmiris is that rich non-locals will use their new residency status to buy up land and property from financially struggling Kashmiris, taking away the only permanent asset that most locals have.

Some civil society groups in Kashmir have been forming committees to warn people not to sell their land to non-locals, he added.

Some Kashmiris look to India’s coastal state of Goa as a sign of things to come.

In 2008, India placed strict restrictions on non-Goans owning land in the state, a popular tourist destination.

At the time, Goans complained that those rules were routinely flouted and blamed illegal homeowners for an erosion in local culture and rising crime.

Real estate experts have said that, for now, fears that the same could happen in Kashmir are unfounded.

Showkat Ahmad Anim, managing director of Arco InfraCon, a commercial construction company based in Srinagar, said his company has not received a single query from non-locals since the revocation of Jammu and Kashmir’s special status.

“No one wants to own land or property here due to the turmoil. Everyone would prefer to go to America, Dubai or Sharjah,” he said.

Even with the real estate sector at a standstill, the Jammu and Kashmir State Industrial Development Corporation has been creating a bank of state-owned land to sell to outside investors, according to officials who requested anonymity because they were not authorised to talk to the press.

Along with possibly losing land and property, Kashmiris say they fear that giving non-locals the rights of residents will make it harder for locals to get access to jobs, spaces at schools and universities, and public housing.

Khurram Pervez, a prominent human rights activist based in Srinagar, noted that currently residents living in slum areas in Jammu and Kashmir are entitled to affordable housing.

The new law could make “tens of thousands” of migrant labourers from other Indian states eligible for public housing, too, he warned.

Sheikh Ashiq Ahmad, president of the Kashmir Chamber of Commerce and Industry, noted that the territory’s economy is struggling.

Tourism, exports and other sectors have been hit hard by frequent lockdowns and internet blackouts since August last year – which India said were necessary to maintain security in the region – and then the ongoing coronavirus pandemic.

Since the August lockdown, he said, Kashmir’s economy has suffered a loss of more than $5.3 billion.

“I have been associated with the Chamber for the last 10 years and this is the worst time that I have ever witnessed,” he said.

Ashiq worries that an influx of non-locals will prolong and complicate Kashmir’s recovery efforts.

“Adding more people to the union territory will only aggravate the economic crisis and increase the burden of unemployment,” he said.