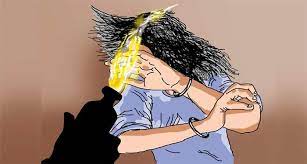 The Dispatch Staff
Add Comment
The victim, whose identity is not to be disclosed as per a court order, was attacked by two people, including a juvenile, who wanted to "teach her a lesson and take revenge" on her for spurning a marriage proposal.

Srinagar: The Jammu and Kashmir Police was lucky to get evidence from the scene of crime of the February 1 acid attack on a woman as someone had “inadvertently” cleaned the area with water, according to the charge sheet filed in the case.
The victim, whose identity is not to be disclosed as per a court order, was attacked by two people, including a juvenile, who wanted to “teach her a lesson and take revenge” on her for spurning a marriage proposal.

“Immediately after this incident, the scene of crime was minutely examined by SHO of police station Nowhatta, and it was found that the place of occurrence was already cleaned inadvertently by one lady….by washing it with water.

“However, some stains were noticed at the gate of a nearby house which were collected on two pieces of white cloth and seized on the spot in presence of independent witness,” the charge sheet said.

The charge sheet has been filed against Sajjad Altaf Rather, Mohammed Saleem Kumar and the juvenile, whom the police want to charge as an adult because of his involvement in a heinous crime.

According to the charge sheet, the juvenile helped the police to recover a black-coloured glass bottle that was used to throw the acid on the victim’s face.

Injury marks were noticed in the upper portion of the juvenile’s right hand, and he was taken to a hospital for examination where doctors opined that the injury was caused by a chemical substance, it said.

During the course of the investigation, it came to light that the victim had rejected a marriage proposal from the accused, causing resentment. The accused decided to “teach her a lesson” and “conspired to take revenge from the victim”, the charge sheet said.

The SIT also recorded separate statements of Rather and the juvenile about the route taken by them which was corroborated by CCTV footage.

Mobile phone records as well as their locations have also been annexed with the charge sheet to corroborate the conspiracy angle into the case.

Rather, who is the main accused in the case, had returned to the medical store where he was working as a salesman after committing the heinous crime.

The victim is undergoing treatment in a Chennai hospital with all expenses borne by a businessman-turned politician.