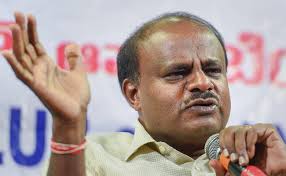 The Janata Dal (Secular) on Thursday announced a list of 10 candidates for the by-elections at 15 assembly constituencies, scheduled to be held on December 5.
The party has fielded Devaraju from Krishnarajpet, Javarayi Gowda from Yeshwanthpur, Mallikarjun from Ranebennur, Anjappa Jatappa from Hirekerur, NM Nabi from Vijayanagar, KP Bache Gowda from Chikkaballapura, Krishna Murthy from Krishnarajapuram, C Somashekar from Hunsur, Tanveer Ahmed from Shivajinagar and Chaitra Gowda from Yellapur. The party also stated that from Hosakote seat, JD(S) will support independent candidate Sharat Bachegowda.
This comes after 15 of the 17 disqualified MLAs in Karnataka joined BJP in presence of Chief Minister BS Yediyurappa here.
Out of the 17 disqualified legislators, MTB Nagaraj is already a member of the BJP, while Roshan Baig has been left out.
On Wednesday, the Supreme Court had upheld the decision of the then Karnataka speaker K R Ramesh Kumar to disqualify 17 rebel Congress-JD(S) MLAs under the anti-defection law but said that they can contest the upcoming by-elections in the state.
The rebel legislators were disqualified by the then speaker K R Ramesh Kumar in July earlier this year under the anti-defection law after they tendered their resignation. They were also barred from contesting polls for the duration of the current assembly, which is slated to end in 2023.
The move led to the collapse of the Congress-JD(S) coalition government, paving way for BJP to stake claim to form a new government in the state. The disgruntled MLAs then moved the Supreme Court challenging their disqualification. They sought quashing of the order passed by the Speaker and prohibition imposed on them to contest elections. The matter was reserved by the court on October 25.
The elections for 15 out of 17 seats are slated to be held on December 5.