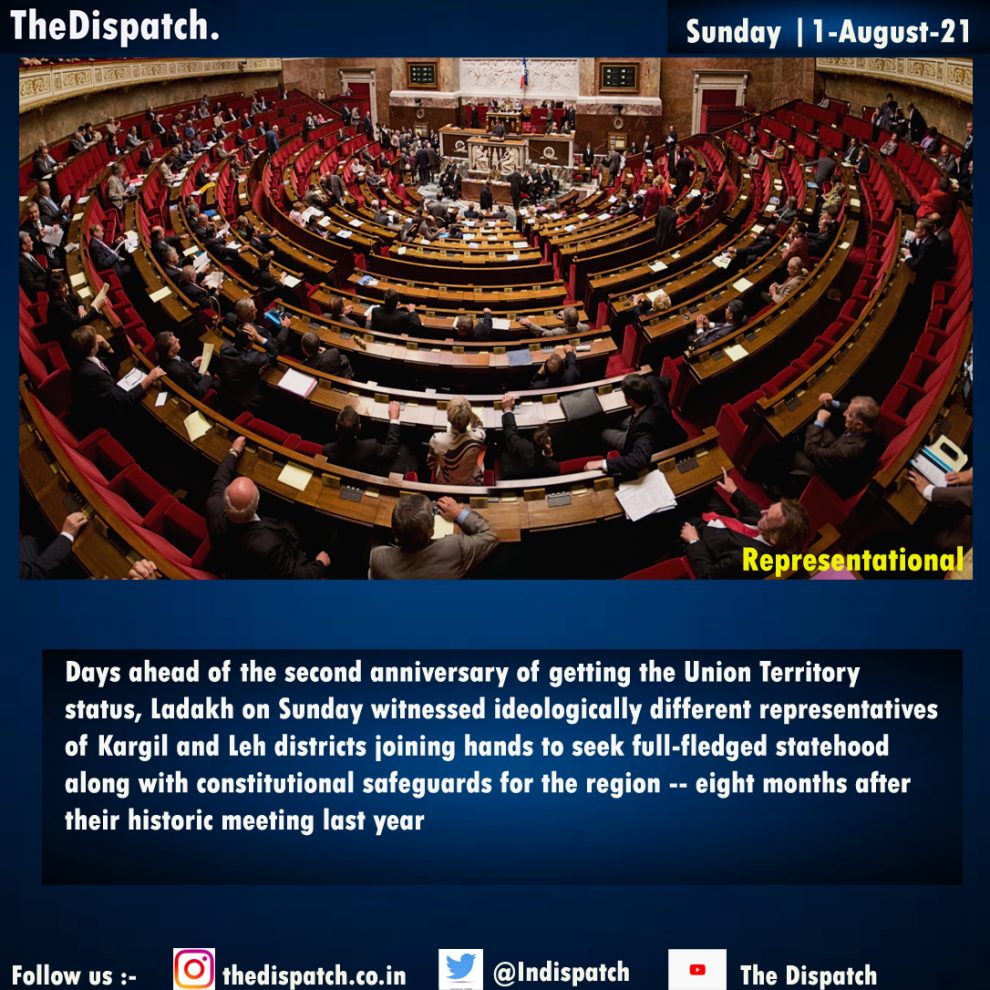 Leh:  Days ahead of the second anniversary of getting the Union Territory status, Ladakh on Sunday witnessed ideologically different representatives of Kargil and Leh districts joining hands to seek full-fledged statehood along with constitutional safeguards for the region — eight months after their historic meeting last year.

The Leh-based Apex Body of People’s Movement for 6th Schedule and Kargil Democratic Alliance (KDA) leaders also said they have reached the consensus to seek one more Lok Sabha seat and two Rajya Sabha seats from the region besides a special recruitment drive for the local youth to fill up over 10,000 vacancies within a month.

This is a historic and golden day for the people of Ladakh. We have reached here on the invitation of the apex body yesterday (Saturday) and held a threadbare discussion to have a consensus on four points including the demand for full-fledged statehood for Ladakh, Co-chairman of KDA Asgar Ali Karbalai told reporters here.

Karbalai, who was flanked by members of both KDA and Apex body including its leader and former MP Thupstan Chhewang, said, We are ready for whatever is necessary to push for our demands We will form a joint committee which will highlight the demands with the Union Home Ministry.

In December last year, a Chhewang-led delegation visited Kargil and held first-of-its-kind deliberations with the leadership of KDA and decided to fight together any law which would be considered against the interests of the people of Ladakh.

Both Apex body and KDA, which is a separate amalgam of socio-religious, political and student organisations of the two districts, were formed after the August 5, 2019 development.

While the people of Leh have welcomed the fulfilment of their long pending demand of UT status and later formed the Apex body in support of the demand for implementation of the sixth schedule of the Constitution to safeguard their culture and identity, the KDA was not in the favour of UT status and raised the demand of statehood to Ladakh.

The Apex body had held several meetings with the Union Home Ministry in support of its demand, while the KDA representatives also had a meeting with a committee of the ministry last month.

We are forming a joint committee which will represent the entire Ladakh and hold further dialogue on various demands with the central government. The focus of our demands will be full-fledged statehood for Ladakh, constitutional safeguards whether under sixth schedule or Article 371 of the constitution and one more seat in Lok Sabha and two Rajya Sabha seats, Chhewang said.

He said they are setting a deadline of one month for the UT administration to fill up 10,000 to 12,000 pending vacancies in different departments as no recruitment has been held in the region since August 2019.

We want the administration to provide jobs to the local educated youth as per already issued Permanent Resident Certificates for identification of Ladakh residents. Domicile law like the one implemented in J-K is not acceptable to us, he said.

The leaders said they would not hesitate to come on the roads, stage protests and go for shutdowns in the interest of the people of the region.

Have trust and faith in the joint committee. We will not let you down, Karbalai said, asserting that they have set their political differences aside for the larger interest of the people of Ladakh and the holistic development of the region.

In response to a question, Chhewang said BJP representatives were also part of the deliberations. Member Parliament Ladakh and other party leaders were not present because of their prior commitment, he added.

Former minister Qamar Ali Akhoon from Kargil said the case related to the revocation of Article 370 and Article 35A is pending before the Supreme Court and the meeting unanimously decided that the decision of the apex court on the issue would be acceptable to all the parties.