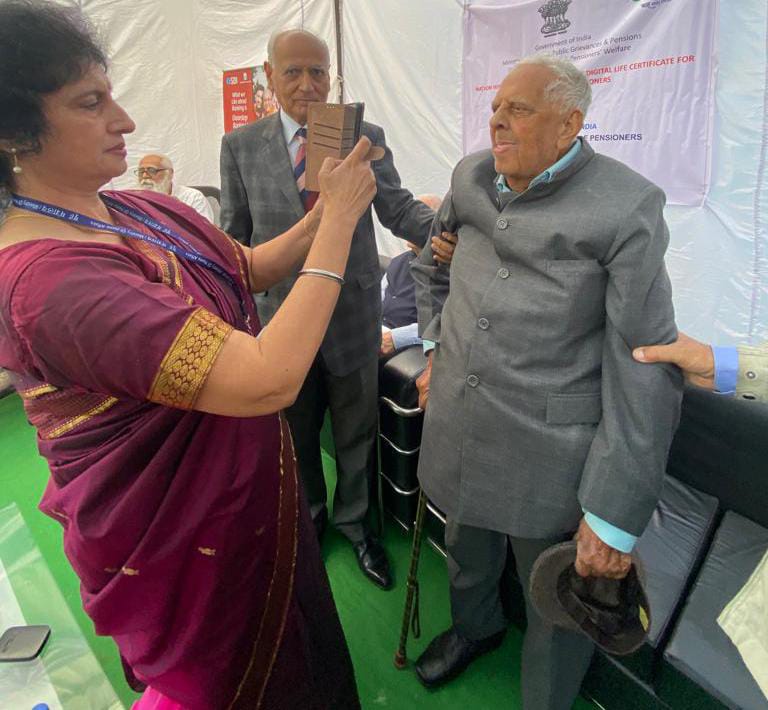 JAMMU: A 95-year-old former chief engineer was among more than 120 pensioners whose Digital Life Certificate (DLC) was generated at a one-day DLC camp held at SBI Jammu Cantt branch on Saturday.

The camp was organised by the Department of Pension, Ministry of Personnel, Public Grievances and Pension, Govt of India for the Central Government Pensioners and pensioners of the Ministry of Defence (SPRASH) in collaboration with the SBI, UDI and Central Govt Pensioners’ Welfare Association, Jammu (CGPWA).

The first pensioner whose DLC was generated at the camp was 95-year-old K R Gupta, former Chief Engineer, All India Radio and founding President of the CGPWA.

Speaking to the media on the sidelines of the function, he lauded the initiative of the Pension Department of Govt of India in making the life of pensioners easy. He also complimented the CGPWA Jammu for its growth and initiatives it has been taking for the welfare of the pensioners.

DLCs of more than 120 pensioners generated at the camp through Face Authentication Technique. The Senior Consultant of the Department of Pension, Ramanjit Kour, who headed the visiting team, apprised the pensioners of the initiative of the Department to make the exercise of the Life Certificate easy.

This certificate is required to be submitted to the concerned Pension Disbursing Bank in November every year (pensioners aged 80 years in October) to ensure continuity of their pension in the bank concerned. Kour explained the steps to be followed on their android mobile to generate the DLC through Face Authentication Technology based on UIDAI Aadhaar database’.

The former Chief Secretary & Secretary to Govt of India, B R Sharma, former DGP J&K, Dr Ashok Bhan, Patron of CGPWA & former ADGP, S S Wazir & General Secretary, CGPWA, K B Jandial also complimented the Department for organising such camps all over India to create awareness among the pensioners about the new technology that has made the system of submission of Life Certificate very convenient.

What is Digital Life Certificate?

Jeevan Pramaan is a biometric enabled digital service for pensioners. Pensioners of Central Government, State Government or any other Government organization can take benefit of this facility.

More than One Crore families in India can be classified as pensioner families, where the pension disbursed by the various government bodies forms the basis for their income and sustainability. There are about Fifty Lakh pensioners of the Central Government and a similar number of the various State and UT Governments and various other government agencies. This includes pensioners from the various public sector enterprises. In addition to this Army and Defence Personnel drawing pension exceeds Twenty-five lakhs.

One of the major requisite for the pensioners post their retirement from service, is to provide life certificates to the authorized pension disbursing agencies like Banks,Post offices etc., following which their pension is credited to their account. In order to get this life certificate the individual drawing the pension is required to either personally present oneself before the Pension Disbursing Agency or have the Life Certificate issued by authority where they have served earlier and have it delivered to the disbursing agency.

This very requirement of personally being present in front of the disbursing agency or getting a life certificate often becomes a major hurdle in the process of seamless transfer of pension amount to the pensioner. It has been noted that it causes a lot of hardship and unnecessary inconvenience particularly for the aged and infirm pensioners who cannot always be in a position to present themselves in front of the particular authority to secure their life certificate. In addition to this a lot of government employees post their retirement choose to move to a different location either to be with their family or other reasons, hence causing a huge logistical issue when it comes to accessing their rightful pension amount.

Digital Life Certificate for Pensioners Scheme of the Government of India known as Jeevan Pramaan seeks to address this very problem by digitizing the whole process of securing the life certificate. It aims to streamline the process of getting this certificate and making it hassle free and much easier for the pensioners. With this initiative the pensioners requirement to physically present himself/herself in front of the disbursing agency or the certification authority will become a thing of the past benefiting the pensioners in a huge way and cutting down on unnecessary logistical hurdles.