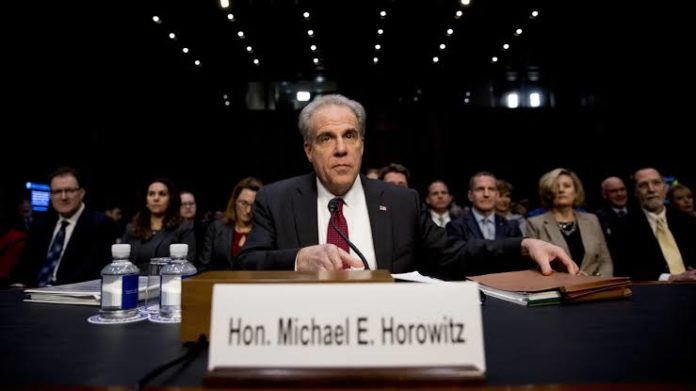 US Justice Department’s Inspector General Michael Horowitz on Wednesday lashed out at Federal Bureau of Investigation (FBI) for “basic, fundamental, and serious errors” in its initial investigation into Russian influence in the 2016 presidential poll, which he said amounted to a “failure by the entire chain of command.”
Horowitz appeared before the Senate Judiciary Committee to testify on the results of his 476-page report into the origins of the original FBI ‘Crossfire Hurricane’ probe into the Donald Trump campaign. In particular, the Inspector General criticised the FBI for serious irregularities, inaccuracies and omissions in obtaining authorization from the Foreign Intelligence Surveillance Court to surveil Carter Page, a former Trump campaign adviser suspected of ties to Russian intelligence, The Voice of America News reported.
According to the report, in one crucial omission, the FBI failed to disclose to the court and the Justice Department that Page had been approved as an “operational contact” for the CIA and had told the spy agency about his contacts with Russian intelligence officers,
However, the report said that the disclosure would not have prompted the court to reject the application.
While Horowitz’s investigation determined that the FBI complied with the policy when it launched the Trump-Russia investigation, it still highlighted “significant concerns” over how it was conducted and managed.
Despite the serious inaccuracies, however, the Inspector General said he found no “political bias or improper motivation” in the FBI’s decision to launch the probe.
That is a conclusion disputed by Attorney General Bill Barr, who said Tuesday that the investigation was launched on a “completely bogus narrative” which was “fanned and hyped by an irresponsible press.”
Barr decried what he called “inexplicable” and “intolerable” behaviour at the FBI.
The FBI launched its investigation in July 2016 after receiving a tip that the Russian government was considering helping the Trump campaign by releasing damaging information about Democratic candidate Hillary Clinton in the form of thousands of emails stolen from the Democratic National Committee.