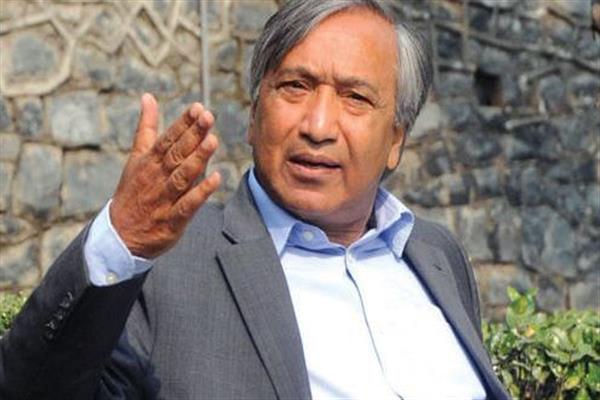 Srinagar, Aug 23: Terming the joint resolution of six political parties stating that they will strive for reverting to pre-August 5, 2019, position, a significant decision, CPI (M) leader Mohammad Yousuf Tarigami on Sunday alleged that hopelessness has engulfed the whole J&K because of BJP government’s wrong decisions and policies.

“It is the responsibility of the political parties to get the people out of this hopeless situation and it is a welcome step that they have initiated the process. We expect more people from all regions and communities to join this process so that the dignity of J&K is restored. We stand by the unity and diversity of the historic state of Jammu and Kashmir. Any division of the state is unacceptable to people of Jammu, Kashmir and Ladakh,” he said in a statement issued here on Sunday.

He said foundations of the relationship between J&K and Union of India were assaulted on August 5, 2019 and it was accompanied by repressive measures meant to silence people and coerce them into submission.

However, he said unanimity amongst political parties to collectively struggle to get back the special status and restore the Constitutional guarantees forcibly taken away, is a welcome step.

The statement said they will strive for the restoration of Articles 370 and 35A, the Constitution of J&K and full statehood.

It said that the signatories to the Gupkar Declaration of August 4 last year have barely managed to establish basic level of communication with each other in the face of a series of prohibitive and punitive curbs imposed by the government, aimed at impeding all social and political interactions.

The limited confabulations held within the constraints imposed have resulted in this unanimous resolution, the statement said.

The resolution said that unfortunate events of August 5, 2019 have unrecognizably changed the relationship between J&K and New Delhi. In a spitefully shortsighted and unconstitutional move, Articles 370 and 35A were abrogated and the State was bifurcated and relegated to the status of two Union Territories and its Constitution tried to be made unenforceable.

“The series of measures undertaken on August 5, 2019 were grossly unconstitutional and in reality measures of disempowerment and a challenge to the basic identity of the people of J&K. The measures attempt to redefine who we are. These changes were accompanied by repressive measures meant to silence people and coerce them into submission, and continue unabated”.

The resolution further said that these are testing times and times of pain for the peace loving people of J&K. We all reiterate our commitment to collectively fight to restore the Special Status of J&K as guaranteed under the Constitution and the commitments made from time to time. There is unanimity amongst us that collective institution is the effective way to fight for these rights and tirelessly struggle to get back the special status and restore the Constitutional guarantees forcibly taken away, against our will. We want to assure the people that all our political activities will be subservient to the sacred goal of reverting to the status of J&K as it existed on August 4, 2019.

“While expressing gratitude to the people of India, the political parties, the intelligentsia and other civil society groups for opposing the unconstitutional measures of August 5, 2019 and ever since standing with the people of J&K in this crises, we appeal for their unstinted support to our just cause till the unconstitutional measures of August 5, 2019 are undone and the special status of J&K restored” they said.

The resolution further said, “We exhort leadership of the subcontinent to take due notice of the ever increasing skirmishes at the Line of Actual Control (LAC) and Line of Control ( LOC) resulting in casualties on both sides and unabated violent incidents in J&K and work for enduring peace in the region.

“We all reiterate that we are bound, wholly, by the contents of the Gupkar Declaration and will unwaveringly adhere to it. We are committed to strive for the restoration of Articles 370 and 35A, the Constitution of J&K and the restoration of the State and any division of the State is unacceptable to us. We unanimously reiterate that there can be “nothing about us without us”.