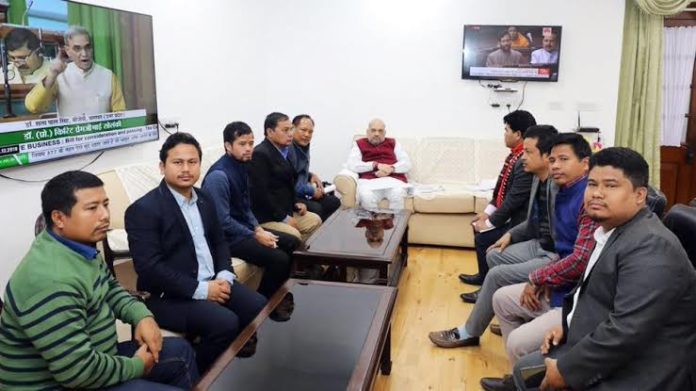 The Joint Movement against Citizenship Amendment Bill (JMACAB) on Thursday called off their strike in Tripura after a delegation met Union Home Minister Amit Shah in Delhi and were assured that their concerns over the Citizenship (Amendment) Bill would be addressed.

A delegation from Tripura of Joint Movement Against Citizenship Amendment Bill (JMACAB) discussed their concerns over the Citizenship (Amendment) Bill, 2019 with the Home Minister. “Today, we were called by the Home Minister to discuss the issues on the Bill… We have placed all our demands and issues. He listened patiently and also addressed that he will think and see what can be done. He also introduced us to Minister of State to further discuss the issue. The Home Minister also requested to go back again and think about what solution can be brought together collectively,” Anthony Debbarma, Convenor of JMACAB, told here.

“We also have assured that we will go back to the state and will discuss with our people, then we will come with all the points that we want to be implemented by the central government. We had a good meeting and we appeal to people to bring peace and harmony in the state,” he added.
Debbarma stated that a meeting was earlier held on November 29. “(At that time) we had placed all our issues and concern, and he had given us more than two hours… Today, even after the Bill got passed in Lok Sabha and Rajya Sabha, still he called us because we had called for an indefinite strike to protest against the Citizenship (Amendment) Bill… With the kindness of the Home Minister calling us to listen the voice was grateful from his side and we are grateful to him,” he stated.

BK Hrangkhawl, Member of JMACAB told , “We have been assured that whatsoever is possible from their end, they will surely try to do… We will go back, sit together with our political party friends and come back again with a proposal which can be resolved.”Tripura Chief Minister Biplab Kumar Deb after a meeting with the representatives of JMACAB on Wednesday said that they have withdrawn their indefinite strike called against the implementation of the Bill.

“The JMACAB has withdrawn its indefinite strike called against the implementation of the Citizenship Amendment Bill, 2019,” Deb said addressing a press conference.
The Bill has been passed by Parliament, with the Rajya Sabha giving its nod on Wednesday night.
On Monday, Lok Sabha had approved the Bill which seeks to grant Indian citizenship to refugees from Hindu, Christian, Sikh, Buddhist and Zoroastrian communities fleeing religious persecution from Pakistan, Afghanistan, and Bangladesh and who entered India on or before December 31, 2014.