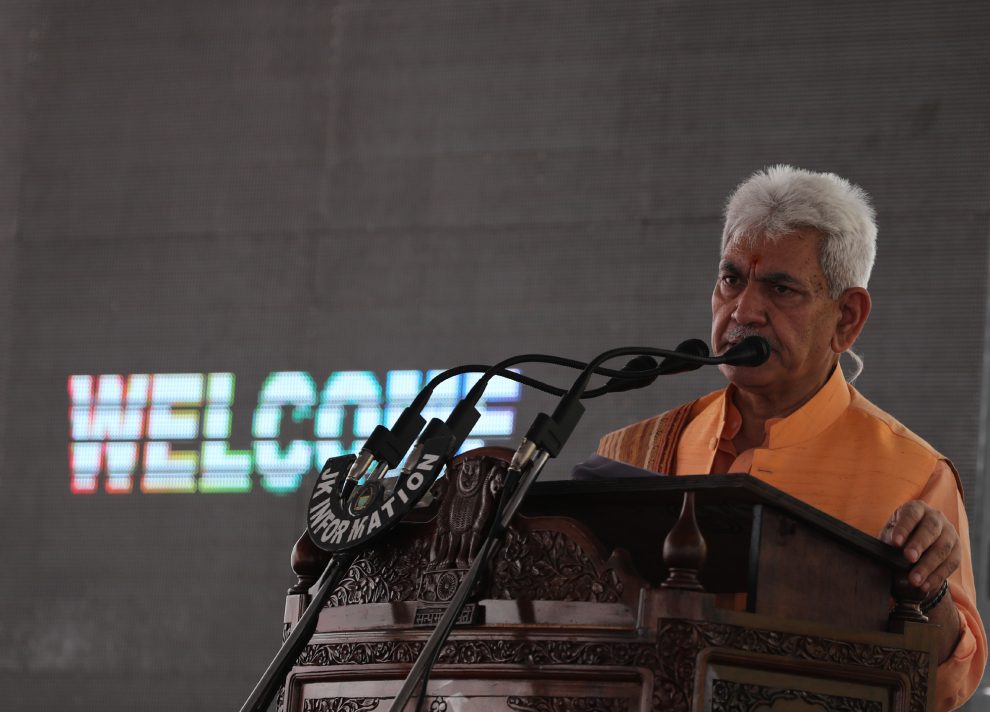 The Dispatch Staff
Add Comment
“One was even afraid of hearing the name of persons who were in the Government jobs,” he said in an apparent reference to the two sons of Hizbul Mujahideen supremo Syed Salahuddin who were among 11 employees dismissed from the services recently.

Jammu: Lieutenant Governor Manoj Sinha said today that there will be no place in the Government for officers/officials who are threat to unity and sovereignty of the country.

“One was even afraid of hearing the name of persons who were in the Government jobs,” he said in an apparent reference to the two sons of Hizbul Mujahideen supremo Syed Salahuddin who were among 11 employees dismissed from the services recently.

“There will be no place in the Government jobs for those who are threat to unity and sovereignty of the country,” the Lieutenant Governor declared in what is being considered as stern warning to the Government officials/officers engaged in anti-national activities in the Union Territory.

Asserting that previous Government had intentionally overlooked such cases (appointments of Salahuddin’s sons), Sinha disclosed that these jobs were not based on merit and were given as “favours”.

“All such cases are under scrutiny and Enforcement agencies will launch crackdown to remove such elements from the Government jobs,” he said and pointed out that both sons of Salahuddin were involved in terror funding from abroad.

He disclosed that as per Article 126 of Jammu and Kashmir Constitution, an investigation is conducted against the Government employees involved in terrorism who are threat to the State.

Maintaining that it was not important for him as to whose sons they were, Sinha said the important is the conduct of those working in the Government.

“It’s my responsibility to encourage the employees who are hard workers and working with devotion and punish the wrong doers. There was a provision under Article 126 in the Constitution to take action against the employees involved in terror and secessionism and who are insider threat to the State. Such an action against the employees was also taken in 2016. We invoked the provisions of Constitution of India as all the dismissed officials displayed conduct and character of insider threat,” he said, adding the action was based on proof and there was no prejudice against anyone.

All those dismissed were involved in terror funding and were encouraging secessionism, he maintained. Sinha said 20,000 Government jobs have been identified and process initiated for recruitment in most transparent and fair manner.

“Approach or money won’t fetch the jobs. Only merit will matter,” he added.

Sinha said the Government is working with the motive of “Peace, Prosperity and Progress” of the people of Jammu and Kashmir and several steps have been taken in this direction by the Government.

The Lieutenant Governor asserted that situation has changed over past one and half to two years and security forces have upper hand over the militants.

“Infiltration has stopped, recruitment has come down, violence is on decline and stone pelting has become part of the history. During past 15-20 days, many militants have been killed. Yes, some elements want to stop development and peace in Jammu and Kashmir. Some of them are locals and others outsiders but they are not finding support of local people,” he said.

On conversions of Sikh girls in Kashmir, Sinha said there were three incidents and the girls were traced within 14 hours and restored to their families.

On whether there was need of new Anti-Conversion Law in Jammu and Kashmir, he said there are adequate laws to tackle such incidents and that he has also assured Sikh delegations about this.

On rehabilitation of Kashmir Pandits, Sinha said out of 6000 posts, 3400 have been filled while process of recruitment for rest of the vacancies will be completed in next four to five months.

About militant threats on August 5, 2021 on completion of two years of Article 370 revocation and one year of start of Ram temple construction, the Lieutenant Governor said he reviewed situation in the Security grid meeting on July 8 and security forces, JKP and administration are fully prepared to deal with any kind of situation.

Regarding end of Darbar Move practice, he said 200 trucks used to transport papers from Jammu to Srinagar and vice versa after every six months and this practice has ended with introduction of e-office.

“No file is stopping. We have been monitoring all files. The Chief Secretary and other senior officers are also supervising the working of new system,” he asserted.

On debate over Population Control Law, the Lieutenant Governor said on the issue of population everyone should work unitedly to tackle the issue.

Sinha announced that Government will provide financial assistance to 400 dental surgeons and 800 paramedic to facilitate them to start their own clinics through a specially tailored self-employment scheme under the `Mission Youth’ Programme.