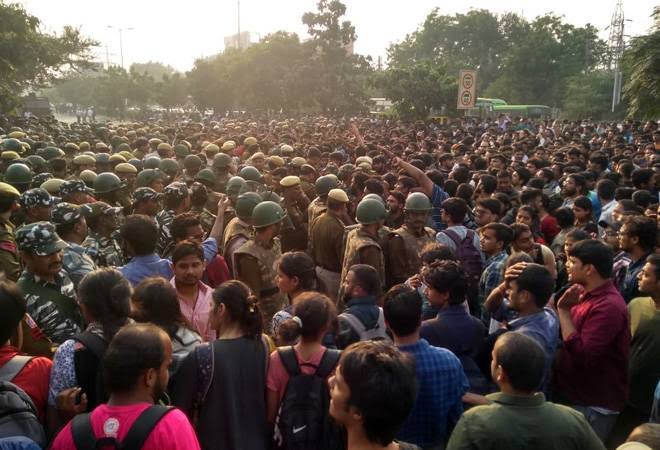 The students who took part in the protests organised by the Jawaharlal Nehru Students’ Union (JNUSU) over fee hike and some other decisions of the university administration on Monday, shouted slogans against the central government and targeted Union Home Minister Amit Shah and RSS.
The protestors were heard shouting – “RSS ke dalalon ko, ek dhakka aur do; Amit Shah ke chamchon ko, ek dhakka aur do”. The “ek dhakka aur do” was an apparent reference to the slogans raised during the demolition of Babri masjid in Ayodhya in 1992. The JNUSU office-bearers have often been critical of the ruling dispensation accusing it of diluting freedom of expression, not allowing dissent and not bearing criticism.
The campus had seen a major controversy in 2016 after anti-national slogans were allegedly raised during an event. The Delhi Police had later filed a charge sheet against some students of the university saying they led the procession and supported seditious slogans.
On Monday, a clash broke out between students and police during a protest organised by Jawaharlal Nehru Students’ Union (JNUSU) over fee hike and some other decisions of the university administration.
Hundreds of students took part in the protest against “massive fee hike” and the new hostel manual which also includes provisions on dress code and curfew timings. They raised slogans against the university administration and the government.
The protest turned out into a scuffle outside the All India Council for Technical Education (AICTE) auditorium where Vice President Venkaiah Naidu addressed the third annual convocation. The students removed a barricade and came face to face with the police.
The protestors targeted Delhi Police with slogan `Dilli Police ki ek bimari – Tees Hazari, Tees Hazari’ in an apparent reference to the clash in the court premises between the police and lawyers.
The protestors also raised slogans against the central government – `Lathi goli ki sarkar, nahi chalegi abki bar’.