All civic work requires more investment and maintenance in the mountains due to harsh climatic conditions and limited land, and this is even more true when it comes to addressing the issue of Municipal Solid Waste (MSW). Unfortunately, in Kashmir this simple truth has been ignored. In the 2019-20 annual budget only Rs 40 million was allocated for rural waste management in Jammu & Kashmir for 91 urban local bodies (municipal committees and councils).

“Out of the total budget allocation of Rs 4.64 billion 80 to 90 % funds are meant for civil works by the Directorate of Urban Local Bodies and not even 15% of the budget is allocated for solid waste management (SWM). On the other hand the government claims in its action plan on SWM issued in Government Order No: 25-HUD of 2019 Dated 21.01.2019 that 5 to 25% of the budget allocation to urban local bodies is spent on waste management,” said Syed Nasarullah, legal advisor of Environmental Policy Group (EPG), a Srinagar based NGO that has filed a Public Interest Litigation (PIL)  on inefficient solid waste management in J&K.

In a flawed strategy to replicate the urban infrastructure of large cities in the plains, municipal authorities have themselves become the rule breakers as garbage dump sites have been created by them around water-bodies. “When we have law enforcing agencies doing all these criminal acts, what can we expect from citizens?” Nassarullah asked

Agriculture landholding in Kashmir has come down drastically due to massive urbanisation. The average land holding as per 2015 agriculture census is now 0.45 hectares. Shrinking farmlands may lead to food insecurity in the future but at present it has a direct impact on management of solid waste. There are no open spaces to create scientific landfill sites across Kashmir. For the last ten years the Srinagar Municipal Corporation (SMC) has not able to acquire even 50 acres of land for creating an alternate landfill site as the existing site at Achan is already choked.

On February 15, 2017, a Srinagar-based English daily reported that there was no alternate site available for creating a new landfill. Former Deputy Chief Minister Nirmal Singh, while responding to a question from local legislator of Srinagar Mubarak Gul, said on the floor of the J&K Assembly that a committee was constituted to look for land to create a new landfill site but the committee headed by District Development Commissioner Srinagar could not find suitable land in and around Srinagar.

If drastic measures are not taken to address the issue of unscientific waste management, Kashmir valley will turn into a trash bowl as plastic and other waste is constantly dumped into Kashmir’s water bodies like lakes, rivers, streams and wetlands. Most of the wetlands and lakes plus deep drains have become choked and this is resulting in constant waterlogging during rain and snowfall. Civic authorities who are supposed to implement Municipal Solid Waste Rules 2016 (MSW Rules) are themselves involved in dumping municipal waste in wetlands and water bodies.

Over the last six years, my research has led me to file several petitions in National Green Tribunal (NGT) and other quasi-judicial forums. The NGT’s intervention has shown some positive results as a committee headed by Divisional Commissioner Kashmir has been constituted to look into destruction of water bodies especially due to dumping of MSW. In its interim order dated April 9, 2019 in response to my petition, the NGT sought a factual report from the J&K government. The operative part of the order reads:

Doodh Ganga is a small river that originates from Pir Panjal glaciers in south west of Kashmir. Around half a million people in Srinagar city get drinking water from Doodh Ganga water filtration plant located in the city’s outskirts. The water supplied is completely unhygienic as huge amounts of solid and liquid waste enter this water body at several places. A huge garbage collection point has been created by SMC on the banks of this river at Bagh-e-Mehtab area in Srinagar where around 800 to 1000 kg of garbage is dumped regularly. When it rains all liquid waste oozes from this collection point and enters Doodh Ganga river. Despite taking up this matter with the Deputy Commissioner Srinagar last year, and his repeated assurances to create a small garden at the site, nothing has been done till date.

The Municipal Committee of Bandipora dumps all the MSW collected from this north Kashmir town on the banks of Wular Lake at Zaalwan village. Wular was identified as a Ramsar site in 1991. In my petition before NGT, I had mentioned about this practice which not only violates MSW Rules 2016 but is also destroying the world famous Wular Lake. Dozens of species of migratory birds visit this lake in winters all the way from central Asia, eastern Europe, Siberia and China. When the NGT sought a response from the district administration and municipal committee of Bandipora, it was informed in writing that solid waste at Zalwan site has been buried in trenches and covered by earth-filling. This is an illegal act, because MSW cannot be buried without proper treatment.

Mushtaq Ahmad, the executive officer of the Bandipora Municipal Committee, said that an alternate site measuring around four acres has been identified and is being used for garbage disposal away from the Zalwan site. When I asked name of the village where the identified site was, the officer could not respond and said the village is around Zalwan.

Local residents and activists refute the claim of the municipal officer and allege that MSW continues to be dumped near the lake.

“I have taken pictures and videos of fresh garbage dumping. There is no alternate site being used by municipal committee,” said Mir Mushtaq, a local activist who has been highlighting illegal garbage dumping in the Wular Lake.  Mushtaq’s fresh pictures are now vital evidence that will be presented to the NGT while filing a response. The case is now listed for hearing in April 2020.

Hokersar Wetland, also known as the Queen of Wetlands, is a perennial water body next to the Srinagar-Baramulla road about 12 kilometres northwest of Srinagar. The wetland was classified as a Wildlife Sanctuary in 1992 under the Jammu and Kashmir Wildlife (Protection) Act, 1978. This wetland gained international importance as it was also declared a Ramsar site in 2005. It has been observed that MSW collected around the Parimpura Fruit Mandi and other areas of Budgam and Srinagar is dumped on the banks of this wetland at different locations, especially around Haji Bagh. In its response to NGT’s interim order, the Wildlife Protection Department in its letter No: WLW/WL/Estt/2019-20/390 Dated: 12.7.2019 said that no dumping of garbage was seen. The letter has annexed some pictures taken in summer when waste usually gets buried under green vegetation.

On December 28, 2019 two local environmental activists Bilal Ahmad and Mushtaq Khan went to the site and found heaps of trash lying on the banks of Hokersar at Haji Bagh village. 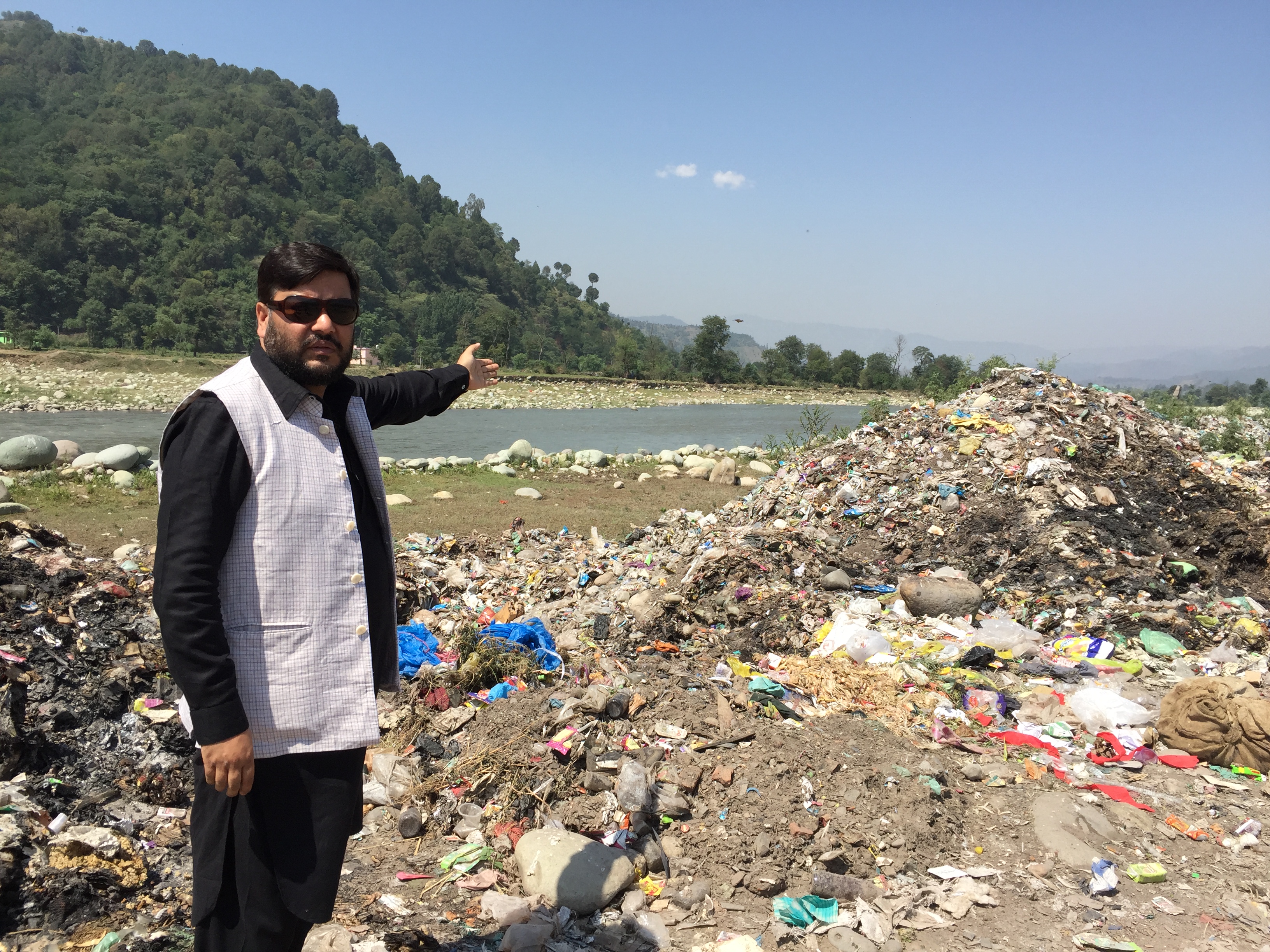 In June 2018, I visited Poonch district of Jammu on the request of the local district magistrate. He had organised a meeting of district and block level officers during which I delivered a talk on scientific disposal of Municipal Solid Waste. It was shocking when I was shown a huge garbage dump site created by the local municipal council on the banks of the Poonch river. The biomedical waste collected from the local government district hospital is also dumped near the river. When it rains, this toxic waste is washed away thus contaminating the water in the river. Ironically the same water from Poonch is lifted by the Public Health Engineering Department (PHED) at many places in Poonch district and supplied to people after some filtration and bleaching processes. This does not make water fit for drinking as Municipal Solid Waste (MSW) contains very hazardous bacteria and viruses. People in towns like Mirpur and Kotli located across Line of Control (LoC) also receive contaminated water in summers.

Responding to this illegal dumping of municipal solid waste, the CEO of the Poonch Municipal Council Gharu Ram admitted that his sanitation staff continues to dump the waste on the banks of Poonch river. He said eight acres of land has been acquired at Kasulian village to create a new landfill. The site has not been made operational yet.

In south Kashmir’s Kulgam district the local municipality dumps all its Municipal Solid Waste (MSW) on the banks of Vishaw river which is one of the tributaries of Jhelum river. Like the Poonch, most of the dumped MSW is washed into river when the water level rises from May to August. There are more than one dozen water supply schemes in Kulgam and Anantnag which are fed with water from Vishaw river and unfortunately these water supply schemes get all the filthy and infected water which is very harmful for human consumption.

The Executive Officer of Kulgam Municipal Committee, Manzoor Andrabi, denied that municipal waste was being dumped near Vishaw river. “We are dumping the municipal solid waste at a new landfill site at village Liraw some 3 kilometres from Kulgam town. The waste is being transported to that particular location from last six months” he said.

“The municipal solid waste continues to be unloaded by trucks and small vehicles on the banks of Vishaw river regularly. The Liraw site is not operational as local villagers from Nursing Pora are said to be opposing the landfill site in the vicinity of their village. Nursing Pora village is only half a kilometre from the proposed landfill site at Liraw, which is also prone to floods,” said a resident of Kulgam, Mushtaq Ahmad Khan.

Initiative by W T I

Wildlife Trust of India (WTI) which is Asia’s reputed wildlife conservation organization has taken a serious note of the degrading wetlands in Kashmir as this is causing a great threat to aquatic life and migratory birds visiting Kashmir’s wetlands in winter months. WTI is planning to undertake a pilot work on management of solid waste in  Hokersar wetland area near Srinagar. The project will focus on Information Education and Communication (IEC) Work followed by handholding people to undertake scientific waste management as well.

I have only highlighted a handful of water-bodies used as garbage dumping sites. There are more than a dozen rivers, lakes and wetlands which are used for dumping MSW. The government needs to decentralise its waste management system and establish small landfill sites at different locations so that not much land is required for each. People who have some land available around their house should be motivated to undertake in-house composting of organic waste. Financial allocation for waste management has to be increased. There is no way forward unless the government gives this issue the attention it deserves.

Srinagar based activist and columnist. He is also Acumen India fellow.