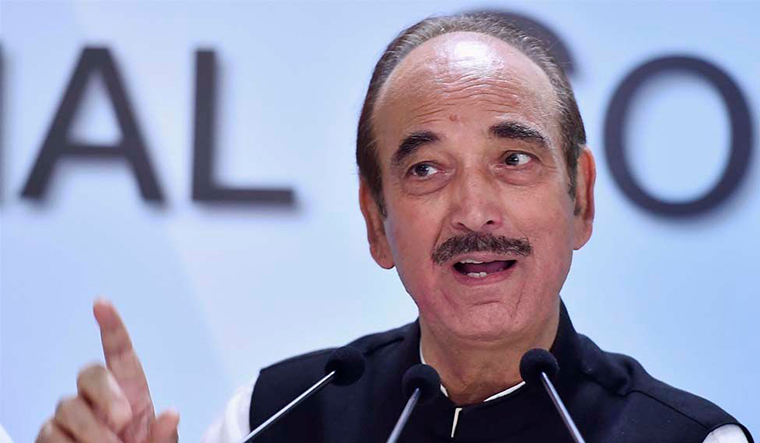 Srinagar: Senior Congress leader Ghulam Nabi Azad on Tuesday called for restoration of Jammu and Kashmir’s statehood before conducting assembly elections and batted for land and job rights for its residents, saying if laws providing such benefits were valid in other areas like Himachal Pradesh, why snatch them away from the erstwhile state.

The former leader of opposition in Rajya Sabha also said his party was waiting for the assurances that Prime Minister Narendra Modi gave at an all-party meeting on June 24 this year to be fulfilled.

He was scheduled to visit both the shrines along with former Congress president Rahul Gandhi — who was on a two-day visit to J-K — but his flight from Delhi reached Srinagar airport late.

Speaking to reporters outside the temple complex, former chief minister of J-K Azad also said Kashmiri Pandits who left the valley in early 1990s in the wake of eruption of militancy should be brought back.

“The (assembly) elections…should be conducted soon. But before the elections, the statehood should be restored, which is very important. Kashmiri Pandits should be brought back.

“Our land and job (rights), which were taken away after Article 370 was revoked, should be secured like they were before (August 5, 2019) through a new law when the statehood is restored,” he said.

“I came from Delhi today, but the flight reached late and that is why we could not meet here. But since it was in my programme, I came here and will also go to Hazratbal,” he said.

Asked about the BJP’s charge that the Congress party had lost its credibility, Azad said, “Everyone knows who has the credibility.”

After the Kheer Bhawani visit, Azad went to Hazratbal shrine here to pay obeisance. Later, he joined Gandhi at the inauguration of Congress Bhawan at M A Road here.

Addressing the gathering, Azad said it was not Article 370 that gave the provision of the protection of land rights to J-K.

He said if other places like the northeast or Himachal Pradesh could have such laws, why cannot Jammu and Kashmir. “It (land rights protection) was not a new law. It was passed by (the then ruler of J-K) Maharaja Hari Singh in 1927. Northeast has special provisions on land rights while the Himachal Pradesh assembly has also passed a law. Why snatch it from JK?” he asked.

The senior Congress leader expressed hope that the assurances given by the prime minister at the all-party meeting will be fulfilled.

“At the all-party meeting, the PM gave assurances. We hope that he will fulfil those assurances including the five points raised by the Congress. They should restore statehood and then hold elections,” he said.

He urged Gandhi to raise the issue of J-K in Parliament so that a bill that restores the statehood and protects land and job rights of locals is passed in Parliament within the remaining three days of the ongoing session.

“I request Rahul ji to raise this issue, bring a bill in Parliament in the ongoing session that will restore the statehood and protect the land and job rights. There is not much to debate, it will take just five minutes,” Azad said.

He said that J-K cannot be a state like Delhi where every order has to be approved by the Lieutenant Governor.

“J-K is a border state and the L-G cannot govern it. We don’t want a Delhi like state where L-G has to approve every order,” he said.

Azad termed the developments of on August 5, 2019 as “the biggest joke played on the people of Jammu and Kashmir and democratic India.”

“It was the biggest joke in democratic India that was played on J-K. The statehood was snatched and two Union territories were created. It has never happened in India, perhaps nowhere in the world. Even in Parliament’s history, it has never happened,” he said.

The former leader of opposition in Rajya Sabha said he and his colleagues tried to visit J-K in the aftermath of the Centre’s August 5, 2019 decisions, but were stopped.

“I had to approach the Supreme Court which gave limited access. I could only visit Baramulla, Anantnag and Jammu,” he added.

The former J-K chief minister said industrial activity in the Jammu region had suffered as 65 per cent of the 13,000 industrial units had shut down in the past two-and-a-half years.

“Most of these units were manufacturing products which had a market in Kashmir,” he said, referring to the economic downturn in the UT.