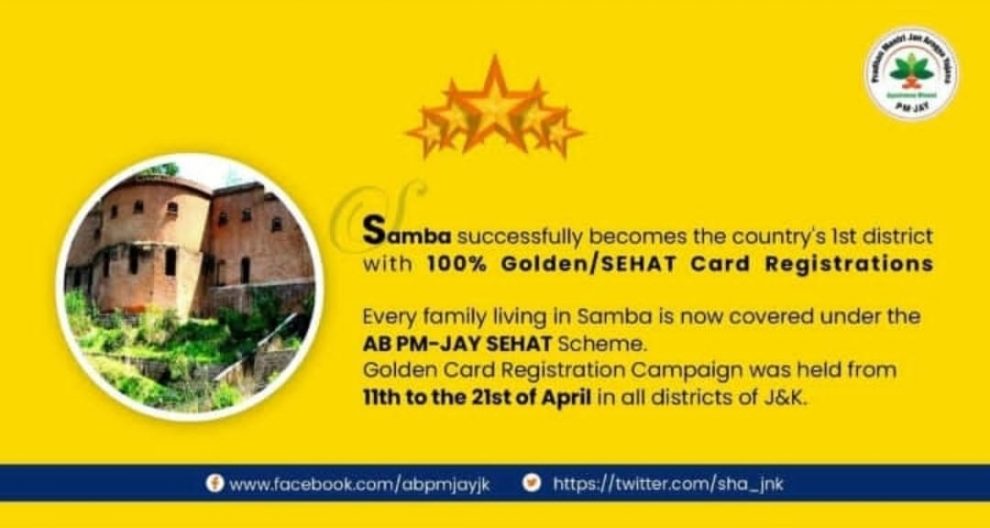 Jammu: Jammu and Kashmir’s Samba has become the first district in the country to cover 100 percent households under the ABPMJAY – SEHAT scheme, officials said.

The Ayushman Bharat Pradhan Mantri Jan Arogya Yojana scheme is the world’s largest health insurance scheme fully financed by the government and provides a cover of Rs five lakh per family per year for secondary and tertiary care hospitalization, they said.

The district achieved the milestone after the conclusion of the special registration drive organized by the State Health Agency (SHA) from April 11 to April 21 in all Block Development Officers (BDO) offices across the district, an official spokesperson said.

The official said the drive was aimed to cover all families under ABPMJAY SEHAT scheme in the district.

According to official data, Samba district has a total of 62,641 families with 3,04,510 people eligible for ABPMJAY-SEHAT golden cards.

“With this success, Samba district has set a standard for other districts of the country to follow and emulate,” he said.