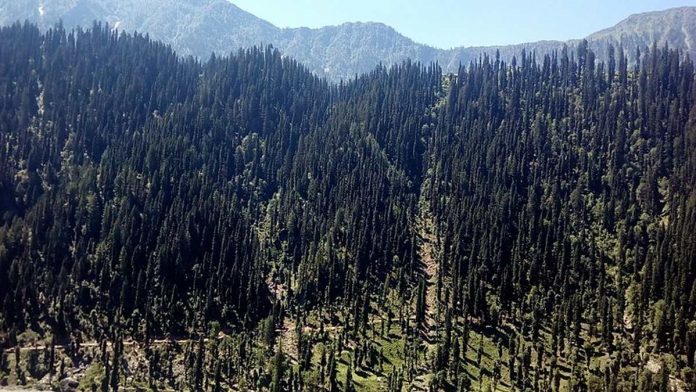 Jammu: The Jammu and Kashmir forest increased to 371 sq km in last 2 years, according to India State of Forest Report released on Monday.

J&K is among top five states which have witnessed significant improvement in terms of forest cover.

India is on track to achieve its goal of creating an additional carbon sink of 2.5-3 billion tonnes under the Paris Agreement, Union minister Prakash Javadekar, while releasing the two-yearly state of forest report, according to which the tree-and-forest cover in the country has increased by over 5,000 sq. kms in the last two years.
Releasing the India State of Forest Report 2019, Javadekar said there was an increase of 42.6 million tonnes in the country’s carbon stock as compared to the last assessment of 2017.

“This report gives us confidence that we are on track to achieve our Paris Agreement goals,” he said.
According to the report, the total tree-and-forest cover in the country has risen by 5,188 sq. km in the last two years, including an increase of 3,976 sq. km (0.56 per cent) of forest cover and 1,212 sq. km (1.29 per cent) of tree cover, compared to the report of 2017 released by the Forest Survey of India (FSI).
Javadekar also said the current assessment showed a decrease of forest cover to the extent of 765 sq. km (0.45 per cent) in the north-east.

“Except Assam and Tripura, all states in the region show a decrease in the forest cover,” the Union minister of environment, forest and climate change said, while reading out the salient findings of the report.

According to the present assessment, the total carbon stock in India’s forests is estimated at 7,124.6 million tonnes.
“There is an increase of 42.6 million tonnes in the carbon stock of the country as compared to the last assessment of 2017. The annual increase is 21.3 million tonnes, which is equivalent to 78.1 million tonnes of CO2.
“Soil Organic Carbon (SOC) represents the largest pool of carbon stock in forests, which has been estimated at 4,004 million tonnes. The SOC contributes 56 per cent to the total forest carbon stock of the country,” the report said.
Besides Javadekar, the release event was attended by Environment Secretary C K Mishra, Siddhant Das, Director General-Forests, Ministry of Environment, Subhash Ashutosh, Director General, FSI, and other officials from the ministry as well as states.
Lauding the efforts of the FSI, Mishra said it was not a routine work but added value and new content to the report.
“It is not a routine mathematical report. It adds value to the report and new content. It provides a set of data which is like a mirror for us to guide us in the right direction. This report is used for policy formulation and improving the quality of forests too,” he said.
Elaborating on the techniques behind the report, Das said it was the outcome of remote sensing and field observation for two years.
“It is the 16th report in the series, which gives out data of not just forests but of mangrove, forest carbon, bamboo resources and forest fires.
“The report was made in collaboration with several institutions, which helped ensure high technological standards. The report is richer in content than the previous one with two volumes — one on the national-level assessment and the other state-specific,” he said.