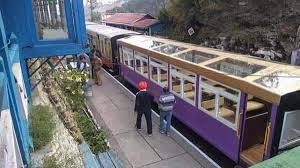 Jammu: The Jammu and Kashmir government on Tuesday said informed that the first vistadome train of the Union Territory isready for launch.

A 40-seater Vistadome train has been proposed jointly by the Union Railway Minister. As per the reports, the trial run of the train was conducted was Conducted on August 31 this year. The trial run of the luxury train was held between Baramulla in north Kashmir to Banihal in Jammu.

The trial was conducted ahead of a documentary shooting to showcase the beauty of the Kashmir rail link on the 137-km long stretch in days to come.
The Vistadome trains are popular because of the glass ceilings they have. These trains have been running in destinations like Switzerland and Peru for a long time now and have been real favourites among tourists who visit these places from all parts.
Although not in full swing, but the concept of Vistadome trains is gradually gaining popularity in India. After enthralling travellers on the Mumbai-Goa and Visakhapatnam-Araku line, the Vistadome trains are coming to the Kashmir Valley in order to boost the tourism there.

In this regard, the Chief Secretary, B V R Subrahmanyam today chaired a meeting to review the progress of Udhampur-Srinagar-Baramulla Railway Link Project that will connect Kashmir valley with the rest of the country through a year-round-all-weather railway link.

The meeting was informed that the project to connect Kashmir valley with a railway line is progressing as per its schedule. Currently, the executing agency has fully utilized the extraction potential of sand and aggregate material in the allocated mines under its Short Term Permit – the supply of which needs augmentation from other mines.

The Chief Secretary said that the Mining Department has recently streamlined the process of lease of mines in J&K and consequently, the supply of construction material will improve in the coming weeks.

Further, to ensure the uninterrupted supply of construction material, the Mining Department and Deputy Commissioners were asked to regularly monitor the extraction from leased mines, besides, resolving the bottlenecks in a time-bound manner.

Regarding the land requirement for the project, it was informed that 99% of the land has been acquired/ handed over to the executing agency and the civil works are advancing smoothly. Deputy Commissioners were asked to resolve all pending issues by 15.01.2021.

Other issues regarding the launch of Vistadome by Northern Railways, introducing shuttle services between Banihal and Udhampur and running of local passenger trains between Katra and Kathua were also discussed.

The Chief Secretary also appreciated the prompt response of Northern Railways during COVID-19 lockdown and their joint efforts with the Government of J&K in providing smooth and hassle-free travel to labour/workforce through the special ‘Shramik’ trains.

Administrative Secretaries of departments of Revenue, Power Development, Mining, and Transport, besides General Manager, Northern Railways, and representatives from IRCON participated in the meeting.