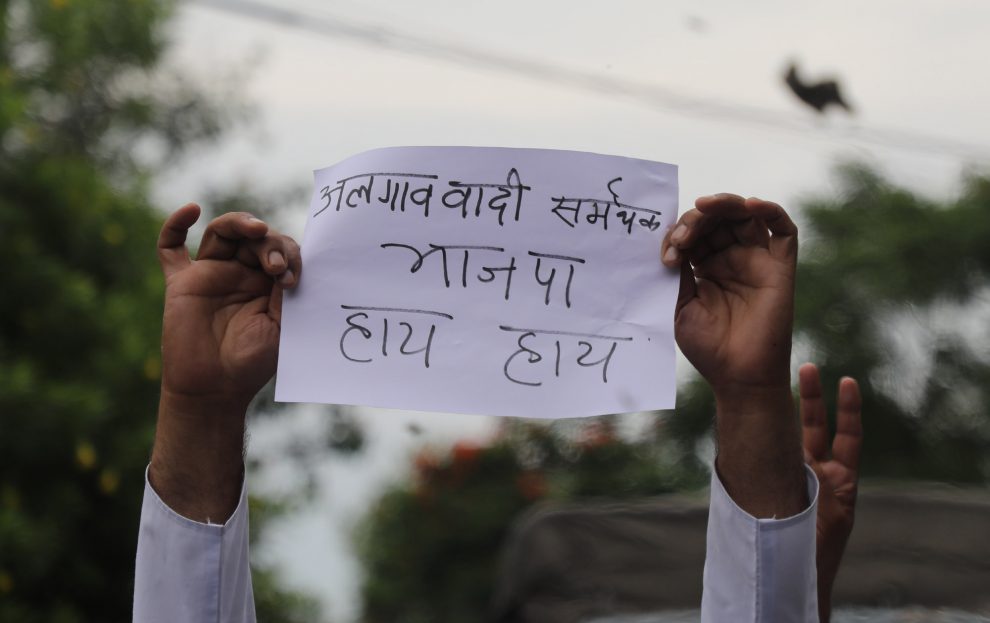 The Jammu and Kashmir National Panthers Party (JKNPP) on Sunday staged an anti-BJP protest here against alleged “Kashmir appeasement policy” of the central government by inviting majority of the valley-based leaders in the scheduled all-party meeting next week.

Fourteen leaders of eight political parties in Jammu and Kashmir — National Conference (NC), PDP, BJP, Congress, Jammu and Kashmir Apni Party, CPI(M), People’s Conference, and JKNPP — have been invited to the meeting that will be chaired by Prime Minister Narendra Modi in New Delhi on June 24 to discuss the future course of action for the Union Territory.

Singh said he is meeting the party leaders on Monday to discuss the invitation and take a decision about his participation.

“I have received an invitation for the meeting and will discuss it with party leaders tomorrow (Monday) to make a decision,” the JKNPP president told PTI.

However, a group of party activists led by JKNPP chairman and former minister Harsh Dev Singh burnt an effigy symbolising the BJP-led central government outside the party headquarters here against its “Kashmir appeasement policy”.

“The government invited all Kashmir-based parties for the meeting but ignored the leadership of Jammu. Altaf Bukhari’s recently launched Apni Party and Sajjad Lone’s People’s Conference, which have yet to be recognised by the Election Commission of India, have got the invitation while only Bhim Singh was invited from Jammu,” Harsh Dev Singh told reporters.

Referring to the invitation to Azad and three former deputy chief ministers from Jammu — two from the BJP and one from the Congress — and BJP president Ravinder Raina for the meeting, he said, “We do not have faith in them because they will toe the line of their respective central leadership. We have confidence in Bhim Singh but how much time he will get to speak at the meeting.”

“Is it not a ploy to promote the pro separatist parties at the cost of aspirations of people of Dogra land,” Singh said.
Meanwhile, Panun Kashmir — a representative of Kashmiri migrant pandits — said any meeting on Kashmir without the participation of their community would be incomplete.

“Kashmiri Pandits are the aborigines and the prime sufferers of the terrorist violence in Kashmir and as a result we need to know the agenda of the all-party meeting. If the representatives of the internally displaced Kashmiri Pandits are not invited to the talks, there would always be doubts and apprehensions in their minds,” president of Panun Kashmir Virender Raina said in a statement here.

He said unity, integrity and social cohesion of the nation is paramount and that was in full demonstration when Article 370 was neutralised. “There is no need to placate all those, not happy with the decision that was hailed by the entire nation as historic and epoch-making,” he said.