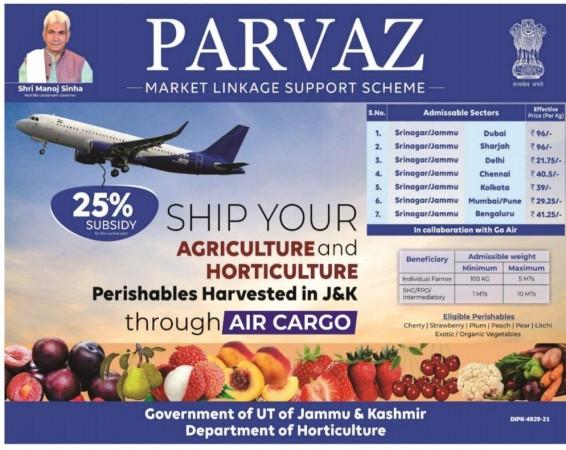 Jammu: The Jammu and Kashmir administrator has announced ‘Parvaz’ scheme to redouble the income of the fruit growers and farmers engaged in growing organic vegetables.

Launched by the government on July 8, this market linkage support scheme is for the shipment of agriculture and horticulture perishable products harvested in Jammu and Kashmir through Air cargo.

After launching the scheme, the J&K government has announced a 25 percent subsidy to encourage farmers to sell their products not only in different parts of India but in Dubai and Sharjah also.

Under this scheme, the government has announced that a subsidy will be provided on the air cargo charges inclusive of the airport handling charges for shipments through empanelled airlines. This subsidy amount will be provided by Direct Bank Transfer (DBT) from time to time.

Currently, till August 31, 2021, the reimbursement will be done in offline mode. This scheme aims at doubling the income of fruit growers and farmers of Jammu & Kashmir thereby ensuring their welfare. This scheme could also be adopted by the Animal, Sheep Husbandry, and Fisheries departments for milk, fish, and other perishables as per the available funds.

Besides rates fixed after the signing of the Memorandum of Understanding (MoU), the J&K government has announced 25 percent more subsidy for some specific fruits and organic vegetables.

“Further, 25% subsidy as provisioned under ‘Parvaz’ scheme notified vide Government Order No. 49-JK(Horti) of 2021 dated 08.07.0221, shall be provided on the air cargo rates on horticulture/agriculture perishable vis-a-vis cherry, strawberry, plum, peach, pear, litchi, and exotic and organic vegetables only. The organic/exotic vegetables eligible under the scheme would be identified by an expert committee to be notified separately,” the official order read.

On May 31 this year, the Jammu and Kashmir government had signed a memorandum of understanding (MoU) with a private airline for the transportation of perishable horticulture and agricultural produce to various destinations across the country.