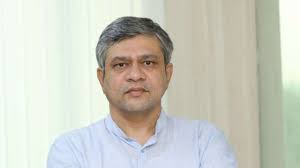 Jammu: It is the dream of the nation to see the rail connectivity between Kashmir and the rest of the country, Union Railway minister Ashwini Vaishnaw on Monday said, asserting that the work on the prestigious project was going on at a fast pace and would be completed soon.
The minister was in Katra, the base camp for the pilgrims visiting the Mata Vaishno Devi shrine in Reasi district, where he attended a public outreach programme and laid the foundation for the construction of two new railway platforms and additional facilities.

Talking to reporters at the Katra railway station, he said Prime Minister Narendra Modi had a very big vision for the railways — all the railway stations across the country are neat and clean, people get better facilities and the train chugs on time.

Asked about the timeframe for completion of the Jammu-Baramulla rail link, Vaishnaw said this is the dream of the nation and the work on this project is going on at a fast pace for its completion.

“The work on various bridges and other linking area was going on at a fast pace so that the rail will start plying on the (Jammu-Baramulla) track soon,” he said, adding that he “will return in one-and-a-half months’ time to review the progress on the work”.

The work on the Rs 21,653 crore Udhampur-Srinagar-Baramulla Rail Link (USBRL) project, which is the most challenging railway infrastructure project being undertaken post-independence, was started in 1997 and has missed several deadlines amid huge cost escalations.

Out of the total 272 km USBRL project, the 161 km was commissioned in phases with the first phase of the 118-km Qazigund-Baramulla section commissioned in October 2009, followed by 18-km Banihal-Qazigund in June 2013 and 25-km Udhampur-Katra in July 2014.

This project is the longest railway tunnel having an overall length of 12.75 km, the highest railway bridge in the world which is higher than the iconic Eiffel tower of Paris. It is the first cable-stayed bridge which when completed, according to railway officials, would be an engineering marvel of the 21st century.

The Union minister said the government was working to provide world-class facilities to the commuters travelling by trains and appealed to people to consider the railway properties as their own.

“The railway is a national asset and my appeal to the people was to safeguard the railway property as their own and also not indulge in disruption of rail traffic. It is our property and this is our railway,” he said.