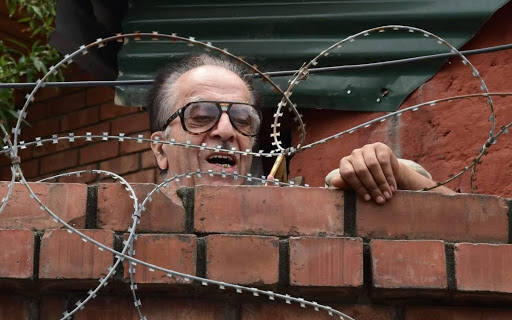 Srinagar, Jul 31:  Upping the ante at J&K Union Territory administration over the controversy of senior Congress leader Prof Saif-ud-Din Soz’s house detention, the mainstream political parties have come out in his support, saying that the government has been lying about not putting politicians in ‘unofficial detentions’ in the valley.

Meanwhile, Prof Soz, who is a former Union Minister, on Friday, reiterated that he continued to remain under house arrest, saying his ‘detention shows how civil liberties stand suppressed in Kashmir’.

The J&K administration had on Wednesday informed the Supreme Court (SC) that there are no curbs on the movement of Prof Soz. However, a video showing Prof Soz not being allowed to move out of his house in Srinagar and talk to media has sparked controversy, prompting all mainstream political parties in J&K coming in support of the former Union Minister.

Later, Jammu and Kashmir Principal Secretary Rohit Kansal took to twitter to defend the government, claiming that Prof Soz was not under house arrest or detained as he visited Delhi twice in October and December and there was no question of lying in Supreme Court (SC).

However, lashing out at Kansal, former chief minister and National Conference (NC) Vice President Omar Abdullah said that Prof Soz traveled for medical reasons and was detained at home as soon as he returned.

“I’m sorry Rohit but it’s better to let the official twitter handles put out the propaganda. I’ve worked closely with you & it’s disappointing to see your handle put out this tweet. Soz sb traveled for medical reasons & was detained at home as soon as he returned,” Mr Abdullah wrote on twitter.

The NC Vice President said it took his colleague more than 72 hours and his cardiologist’s intervention before he was permitted to travel to Delhi for a checkup.

“The moment he returned to Srinagar he was detained again & I’m sure when his case comes up in the High Court the government will claim he’s not detained. It’s very convenient because there are no formal detention papers, just instructions to the police at the gate,” he wrote.

“Soz Sahib’s plight is not unique. @JKNC_ has gone to court because more than 15 of our colleagues are similarly illegally detained & I have no doubt the administration will claim they aren’t detained. As if any of these people would sit at home for a year of their own free will,” Mr Abdullah added.

Meanwhile, reacting to a video doing round on social media in which Prof Soz could be seen out of his residence, the senior Congress leader said the Government version that he was a free man is wrong. “Today, I went to see my ailing sister at Gulbarg Colony, Hyderpora, Srinagar. Since the police would not allow me to travel without its vehicle, two PSOs accompanied me,” Prof Soz said in a statement issued here on Friday.

“When I returned to home, the police produced and released a video showing that I was a free man. This version of the police is nothing more than a white lie,” he said.

The former Union Minister said he tried to go out of his premises at 1235 hrs on Friday to see his daughter in the neighbourhood but the police did not allow me to go out. “I confirm the fact that I am under ‘house-arrest’ and I cannot go out, at all. The Government version that I was a free man is wrong. I do not know why Govt. has resorted to such underhand means. I have not violated any law of the land, yet I am under ‘detention’. My detention shows how civil liberties stand suppressed in Kashmir,” he said.

Iltija Mufti, daughter of PDP president and former chief minister Mehbooba Mufti, said it is sad to see Prof Soz get manhandled by police for speaking to media. “Sad to see Saifuddin sahab get manhandled by police for speaking to media. I faced the same situation in Jan when I tried to address media at my house in Srinagar. @SalmanSoz. I think it would help if he spoke to media via zoom? Will expose J&K admin & police both,” Miss Mufti, who is handling the official twitter handle of her mother since was detained on August 5, last year, wrote.

Taking to twitter, Salman Anees, son of Prof Soz, said the government lied to the SC about the senior Congress leader’s detention. “Dear Supreme Court of India: The J&K Government lied to you. This is proof. Now, will you accept your own humiliation or hold the govt accountable? History will judge you,” Salman Anees wrote and also posted the video in which his father could be seen speaking from behind the house gates.

In a statement issued here, Mr Bukhari said the restriction on Prof Soz is unwarranted and uncalled for even as the J&K administration informed the Supreme Court that Prof Soz was not placed under detention.

Mr Bukhari sought intervention of the Lieutenant Governor G C Murmu into the incident in order to remove the contradictions. “On one side, J&K administration has reportedly filed an affidavit in the Apex Court saying that Prof Soz has not been detained at all and on the other hand the police did not allow the veteran Congress leader to venture out from his residence in Srinagar today. This is an unjustifiable approach on part of the J&K administration which is strongly condemnable,” the JKAP president remarked.

He reiterated his demand for immediate release of Prof Soz besides, PDP president and former chief minister Mehbooba Mufti and all other political activists who are still behind bars.