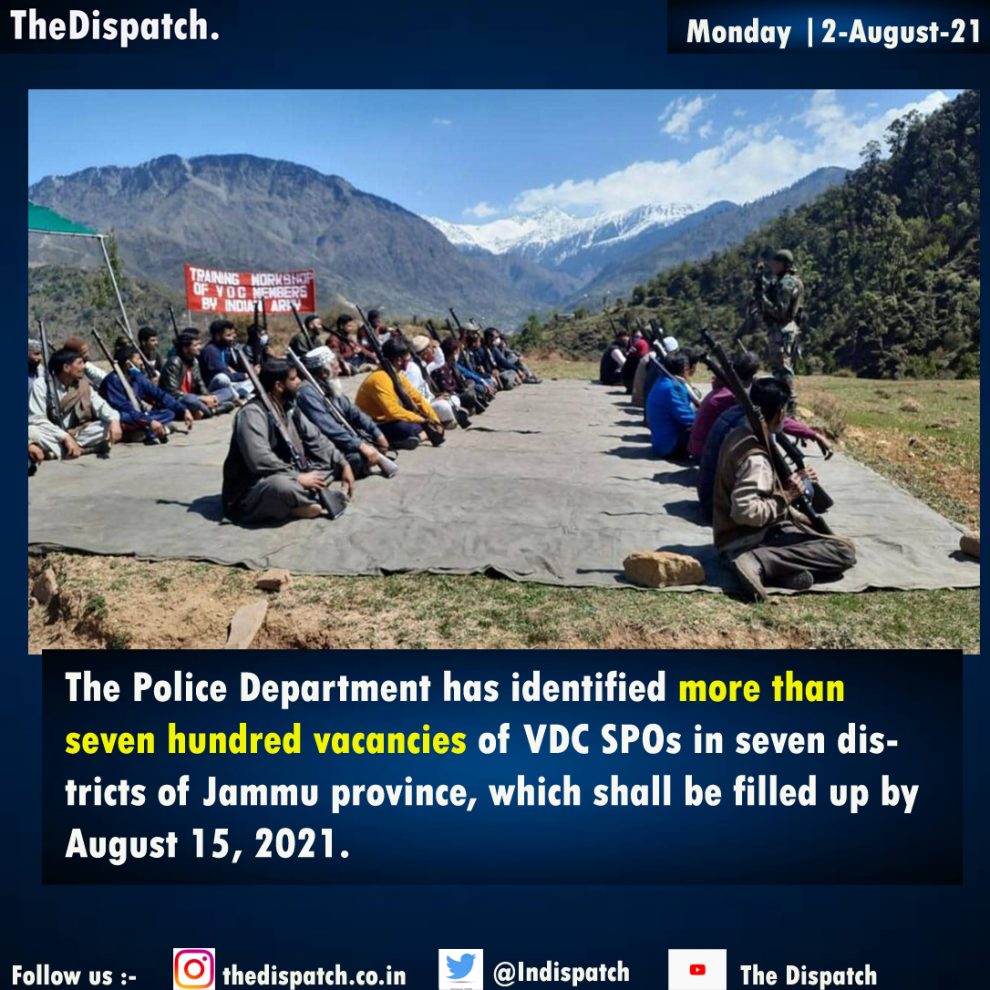 The Dispatch Staff
Add Comment
The Police Department has identified more than seven hundred vacancies of VDC SPOs in seven districts of Jammu province, which shall be filled up by August 15, 2021.

JAMMU: Aiming to revive Village Defence Committees (VDCs) in view of the present security scenario, the Director General of J&K Police has ordered filling up of all vacant positions of Special Police Officers (SPOs) engaged with the VDCs, within next 15 days.

The Police Department has identified more than seven hundred vacancies of VDC SPOs in seven districts of Jammu province, which shall be filled up by August 15, 2021. The significant decision has been taken to fully re-active the VDCs in combating the terror threat in hilly areas of Jammu region that had witnessed massacres of innocent villagers after eruption of militancy in nineties.

To make certain that these SPOs remain engaged with the Village Defence Committees instead of their deployment at other places, youth shall be recruited as SPOs from the same village where the VDC is functioning and from where the VDC SPO was engaged.

“In view of the present security scenario, it would not be desirable to weaken the existing VDCs. It would be advisable to have SPOs from the same village where the VDC is functioning and from where the VDC SPO was disengaged,” read the official communiqué in this regard, issued by DGP Dilbag Singh and addressed to Additional DGP, Jammu Zone, Mukesh Singh.

As per the reports of District Superintendents of Police of Jammu Zone, consequent upon the dis-engagement of VDC SPOs for various reasons, 732 vacancies have accrued in Kathua, Samba, Udhampur, Doda, Kishtwar, Reasi and Ramban districts.

The DGP, in his communiqué No: GB/M-21/2021, dated 30-07-2021, to ADGP Jammu Zone, has also advised to engage equal number of VDC SPOs as per the vacancy position and instructions following the Physical, Educational and Age Standard prescribed by the Ministry of Home Affairs.

Pertinent to mention that the VDCs were first setup in the mid-1990s in the erstwhile Doda region and then in other districts for the self-defence of locals in remote hilly villages against militancy. They were provided weapon training and .303 rifles by State Police. There are more than four thousand VDCs across J&K and they consist of local villagers as well as SPOs. These VDC members are not professionally trained but highly committed towards self and community defence against the armed militants.

Each Village Defence Committee consists of one Special Police Officer, who is deputed to head the Committee and virtually acts as a bridge between the VDC members and the Police force. As a number of such SPOs had turned above 60 years, they were disengaged by the respective District SPs without their replacement with fresh recruits.

It led to more than seven hundred VDC becoming headless and turning weak despite continuous threat of armed militants.

As the DGP of J&K has taken cognizance of the matter and urgency of filling up the vacancies in view of the present security scenario, the exercise is likely to rejuvenate the VDCs which have proved a stone wall defence against militancy in remote hilly areas of the Jammu zone.