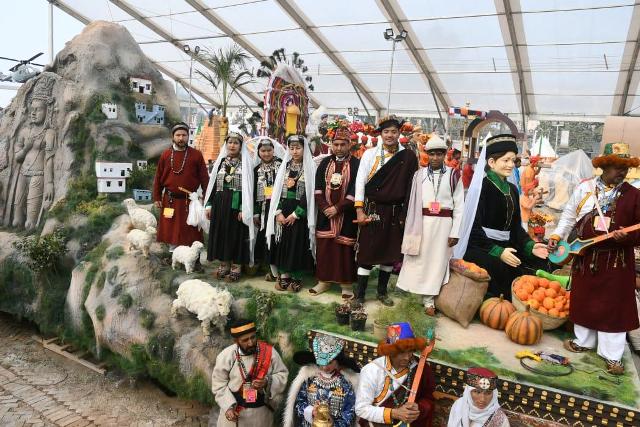 New Delhi: Colourful tableaux from Assam, Maharshatra, Uttar Pradesh, Jammu and Kashmir, Ladakh, Gujarat, West Bengal and several other states and Union Territories will roll down the revamped Kartavya Path during the Republic Day celebrations on January 26, with ‘Nari Shakti’ being the theme for majority of the floats.

A total of 23 tableaux 17 from states and Union territories, and six from various ministries and departments depicting India’s vibrant cultural heritage, economic and social progress will be part of the ceremonial parade, Defence Ministry officials said on Sunday.

A preview of many of the tableaux, some of which are still being constructed or given finishing touches, was held at the Rashtriya Rangshala Camp in the city.

“A total of 23 tableaux 17 from states and Union territories and six from various ministries and departments will be part if the R-Day parade. Besides, there will be floats by the Army, Navy and the Air Force, and a vehicle will be displayed by the DRDO,” the official said.

The theme adopted this year by various states is largely ‘Nari Shakti’, besides cultural heritage and other themes, the official said.

The West Bengal tableau depicts Durga Puja in Kolkata and celebrates its inscription on the UNESCO’s Intangible Cultural Heritage List.

The central government last year had celebrated the 400th birth anniversary of Ahom general. Borphukan was a commander in the erstwhile Ahom kingdom and is known for his leadership in the 1671 battle of Saraighat that thwarted an attempt by Mughal forces to capture Assam.

This will be the first Republic Day celebrations hosted at the ceremonial boulevard after Rajpath was renamed to ‘Kartavya Path’ last year. A full dress rehearsal for the parade will be held on Monday.

The 74th Republic Day celebrations will take place on the revamped Central Vista avenue, and the government has put 32,000 tickets on sale online for the masses, defence ministry officials had earlier said. (Agencies)