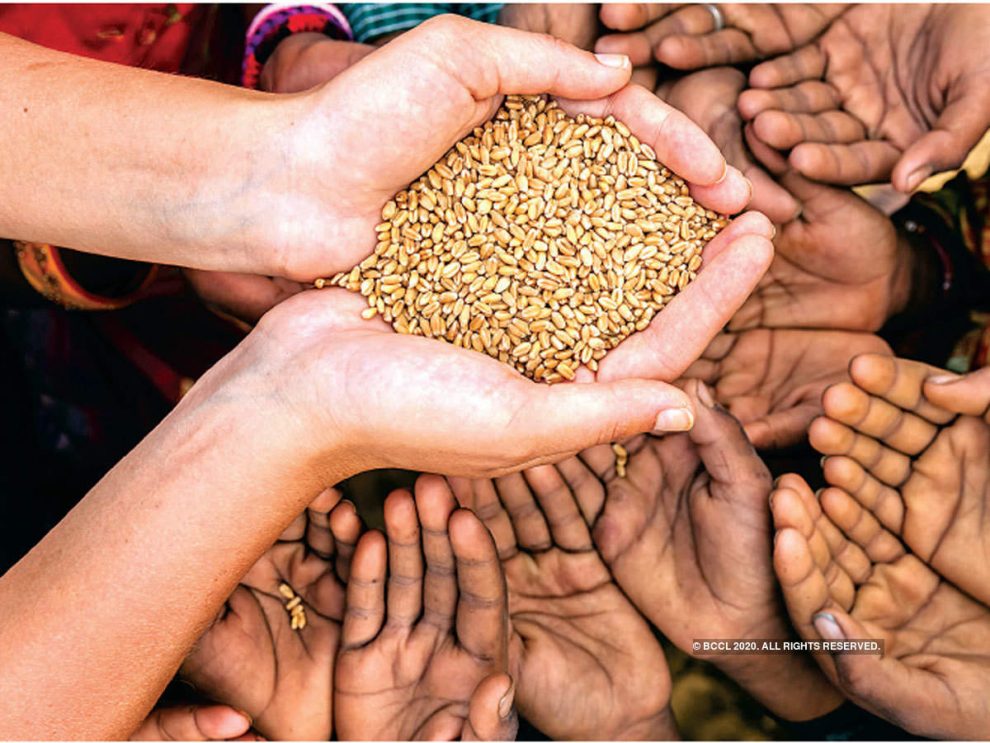 JAMMU: Even as the Government has decided to provide 5 kg free ration for the month of May and June, 2021 to about 67 lakh beneficiaries including PHH/BPL and AAY categories in the Jammu and Kashmir in view of lockdown due to Covid-19 pandemic, the dealers in Jammu and many parts of Kashmir have gone on strike as the Government was forcing them to adopt Biometric/ POS system for the distribution of ration.
Official sources told the Excelsior that like last year’s lockdown, the Government this year has also decided to provide free ration for the months of May and June to the PHH/BPL and AAY category people including poorest of the poor. The Government will provide over all about 6.70 lakh quintals of free ration during these two months to the poor people of J&K including 8.85 lakh AAY category beneficiaries.
For this, the ration (Rice and wheat) lifting process from the godowns of the Food Corporation of India (FCI) has been started. As per Government order, each soul would get total 5 kgs of ration including 4 kg wheat/ Atta and one kg rice. Beneficiaries in urban areas would get Atta instead of wheat. For distribution, the Government has made biometric system mandatory, the sources added.
Sources further revealed that the Department of Food, Civil Supplies and Consumer Affairs (FCS&CA) claimed to have lifted almost 75% of the ration so far of the months of May and June for these categories and also started dispatching the same to various districts, but the Ration dealers in all the ten districts of Jammu province and also in most parts of Kashmir have gone on strike.
They are opposing use of biometric system in distribution of ration due to threat of Corona pandemic. They claimed that while Government has stopped biometric attendance in all of its offices, Civil Secretariat and even CAPD offices, it was forcing public/ ration dealers to use POS system forcing general public to the threat of Covid-19.
With the ongoing strike of ration dealers, all the depots in Jammu City and all other districts, are lying closed and even the NPHH and other category people are not able to get ration amidst lockdown. The general public has been left to suffer and the higher officials in the FCS&CA Department have failed to resolve the issue and provide any relief to the public at the time of crisis. All the ration depots have gone dry in the Jammu region. Excelsior Office also received many public calls during last 2-3 days about closure of ration depots and non-availability of ration.
Joint Director FCS&CA Jammu, Shagun Sharma, who is also officiating as Director Jammu, for the department, when contacted said that Department has already started lifting ration ment for PHH/BPL and AAY category beneficiaries from FCI godowns. She said like last year during lockdown, this year also the Government has decided to provide 5 kg free ration to the poor people. The ration has been stored at many places and even department has started providing the same to the people in some areas, she said.
When asked about the strike of the ration dealers and non-availability of ration, Sharma claimed that she was not aware of any strike. She said nobody approached them with any demand. But the supplies will be made available to the people. On closure of depots, she said, some depots may be closed as many dealers have tested positive. But she had no knowledge about any strike. When asked whether use of biometric attendance/ POS system for ration distribution was safe and justified under such Covid-19 crisis, the JD said, “ they will go by the orders from the top”.
Meanwhile, president, Ration Dealers Association Jammu Province, Prabh Dayal when contacted said that ration dealers are directly facing public at outlets under worst kind of second wave of Covid-19 pandemic. He said many dealers have tested positive and facing problems. They are also working as front line warriors but no facility is being provided to them from the Govt/ CAPD Department. The Officers are forcing them to use biomentric system for ration distribution. The public is not prepared under such a worst kind of situation. He said same is the situation in Kashmir but Directorate in Kashmir tried to resolve the issue in view of Eid.
He said last time also, Govt had exempted the rationees but now the dealers are being forced to use this system while Govt in all its offices has stopped biometric attendance for the safety of the employees. He demanded that the dealers be provided safety kits/ masks/ hand senitizers etc and be covered under Insurance Scheme and Govt should also review its decision of using POS system for food distribution till the situation improves. He said there are about 486 ration depots in Jammu district and all are lying closed at present. He said dealers have not deposited money for the ration and they are not lifting the same till today.
Vijay Kumar, president Ration Dealers Association, Kathua said all the depots (Nearly 245 ) in entire district are lying closed as dealers are on strike. He said they will not operate till their demands are accepted. He claimed that no dealer has deposited money with TSOs till now and they will operate only after senior officers intervene and take any decision.
Naveed Magray, president Ration Dealers Association, Rajouri said that all the dealers in the district and adjoining Poonch are on strike over the issue of POS. He said public is not prepared to agree and they are being forced by the officers to use this system. They should issue written order in this regard and also provide safety kits to the dealers as they are also front line Covid warriors like Policemen and Health workers. He demanded that Chief Secretay and LG must intervene into the matter.