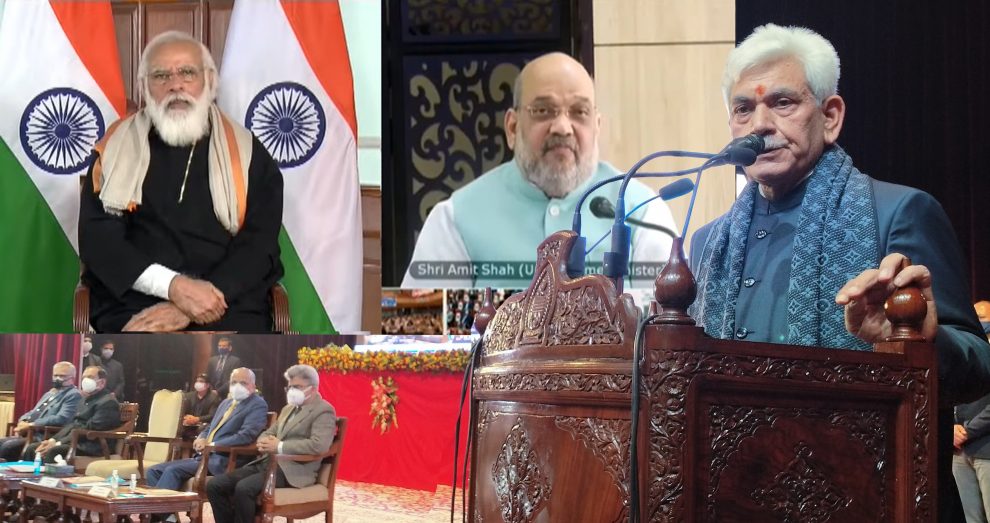 The Dispatch Staff
Add Comment
Expressing happiness over the successful conduct of the District Development Council (DDC) elections despite "attempts by inimical elements to trigger violence", Sinha said the elected members would be administered the oath under the Constitution on December 28.

He also announced 6,000 government jobs will be given to Kashmiri pandit migrants under a prime minister’s package and as many residential quarters will be arranged for them in the Valley over the next two years.

Expressing happiness over the successful conduct of the District Development Council (DDC) elections despite “attempts by inimical elements to trigger violence”, Sinha said the elected members would be administered the oath under the Constitution on December 28.

The Lt Governor was speaking to welcome the Prime Minister at the launch of a scheme extending benefits of Ayushman Bharat to the residents of the Union territory.

Modi rolled out the Social Endeavour for Health and Telemedicine (SEHAT) scheme, under which 15 lakh families would be provided a health insurance cover of Rs 5 lakh each per family per year on a floater basis, thus covering the entire population. Earlier, five lakh deprived families were covered under the scheme.

“As per the directions of the Prime Minister, we are achieving new milestones. We are entering a golden phase of development,” Sinha said, adding transparency with accountability is being ensured and new avenues of skill development and entrepreneurship provided to ensure employment to the local youth.

A new phase of development has started in J&K since August last year, he said.

“We speeded up the developmental works and also provided financial assistance to 1500 youth under entrepreneurship development to make them self-reliant,” he said.

Sinha said there is no dearth of talent in the Union Territory and efforts are on bring in investment and provide employment opportunities to youths.

“The process of appointment of doctors has been completed and (the process of) providing jobs to 13,000 youth is underway,” he said, adding unemployed Kashmiri migrant pandits would be provided 6,000 jobs and as many flats under Prime Minister’s employment package.

“The package was not implemented so far. I assure you that they will be provided jobs within next five months besides 4000 flats within one and a half years and rest within two years for their rehabilitation (in the valley),” he said.

Referring to his meeting with the Prime Minister before taking over as Lt Governor of J&K, Sinha said, “You expressed concern over the issue of unemployment and wanted building of an atmosphere where the local youth could get employment.

‘You also talked about J&K lagging behind other states and the need to bring it into the mainstream and taking development to new heights,” Sinha said.

He said his administration fast tracked developmental projects, handed over the three-tier panchayati raj system to the people and is moving in the direction to make J&K ‘Atmanirbhar’ (self-reliance), he said.

The LG said all incomplete projects sanctioned under Prime Minister’s development package would be completed by 2022.

Sinha said new initiatives in agriculture and horticulture are being taken to tap the true potential of these sectors.

“There has been remarkable progress in all the schemes including rural roads, PM Awas Yogna and Swachh Bharat Mission,” he said.

He said despite all-out attempts by inimical elements to trigger violence, the DDC elections were conducted successfully in a peaceful manner with transparency.

“I have religiously followed your directions to ensure free and fair elections in a peaceful atmosphere. People deserve praise for strengthening democracy at the grassroots level by enthusiastically taking part in the festival of democracy,” he said, thanking the PM.

The new DDC members will carry forward development works in their districts, he said.

Earlier, Financial Commissioner (Health and Medical Education) Atal Dulloo termed the launch of the Ayushman Bharat PM-JAY Sehat scheme a “historic day” for the people of Jammu and Kashmir.

He said J&K has achieved remarkable feat in almost all health indicators and the SEHAT scheme has come as a win-win situation for both the people of the UT as well as the health institutions.

“The universal health coverage aims at providing financial risk protection and risk mitigation and ensuring quality and affordable essential health services to the people and also reducing the out of pocket expenditure,” he said.

He said 97,000 deprived people have got treated at an estimated cost of Rs 54 crore under the centrally-sponsored scheme in the UT.