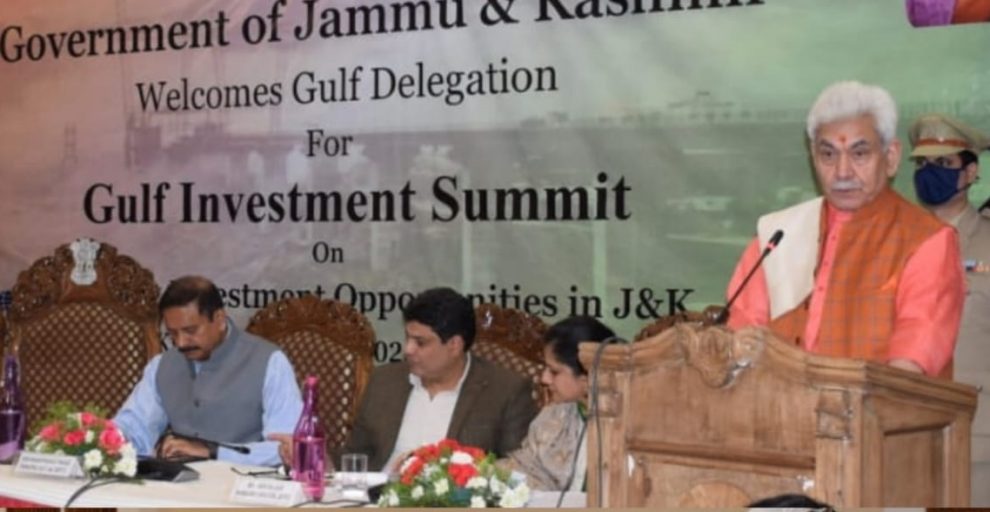 Srinagar: Jammu and Kashmir is at a transformative stage and prosperity and employment opportunities will come and people will coexist peacefully, Lieutenant Governor Manoj Sinha said here on Tuesday.
He also said that about seven lakh jobs will be created in the Union Territory once outside investments bear fruit.

Speaking to media at SKICC here after attending the Gulf Countries investment summit, Sinha said a huge change has started in the J-K in the last two years.

“Especially if I talk about investment and industrial business, a new industrial scheme was created by the Government of India for J-K wherein a proposal of having Rs 28,200 crore as incentives was kept, he said.

The LG said J-K has the better industrial incentive scheme compared to the rest of the country which has resulted in an increased interest in J-K by the businessmen across the country.

While about a year ago, the total outside investment made so far in J-K was about Rs 15,000 crore, today, we have about Rs 27,000 crore investments which have been cleared. We hope in the next six months, it will cross Rs 70,000 crore, he said.

“When the investment is translated on the ground, I hope a minimum of six to seven lakh people will get employment, he said.

Sinha said after Narendra Modi became the prime minister, a new era of friendship started between India and the UAE.

I think, it is for the first time that India’s head of state has twice or thrice visited the UAE and created a new environment of cooperation, Sinha said.

The J-K LG said during the Dubai Expo in January, the J-K administration interacted with many businessmen and invited them to visit J-K so that they could see with their own eyes and explore the investments here.

We interacted today and specified several issues and areas. We have identified their concerns and we have assured them that their redressal will be done in a minimum time period especially in the hospital and medical education, real estate, hospitality, food processing cold storages and cold chains, and education, he said.

Sinha said the delegates were very important people as many of them were CEOs of big companies.

The discussions have been very good. We will now try to take it to the conclusion very soon, he added.

He said the administration has taken steps which have started to show results.

I think it will result in increase in the business and employment generation. The industries and commerce department has made several efforts to take J-K’s horticulture produce, handicrafts and crafts across the world. I am sure we will get huge success in this sector as well. The UT is at a transformative stage where prosperity will come, employment opportunities will come, and people will live in a peaceful coexistence, Sinha said.

Later, taking to Twitter, Sinha said during his address at the summit, he highlighted the scope for J-K and GCC companies’ economic cooperation to make the “paradise on earth” as the most beautiful investment destination in the world.

The visit of CEOs of top companies, entrepreneurs, start-up representatives, exporters in J&K is an expression of confidence of the industry leaders in the potential for business cooperation between J&K and Gulf countries, he said in a series of tweets.

The LG said India’s relationship with Gulf countries is being translated into a vibrant, revitalized economic partnership with J-K that will not only diversify our export basket but will also create a conducive environment for expansion of the existing trade.

He said since the Dubai Expo visit, many foreign companies from UAE have announced long-term plans for J-K. We are ready to take relationship to a qualitatively new level and strengthen our economic partnership .