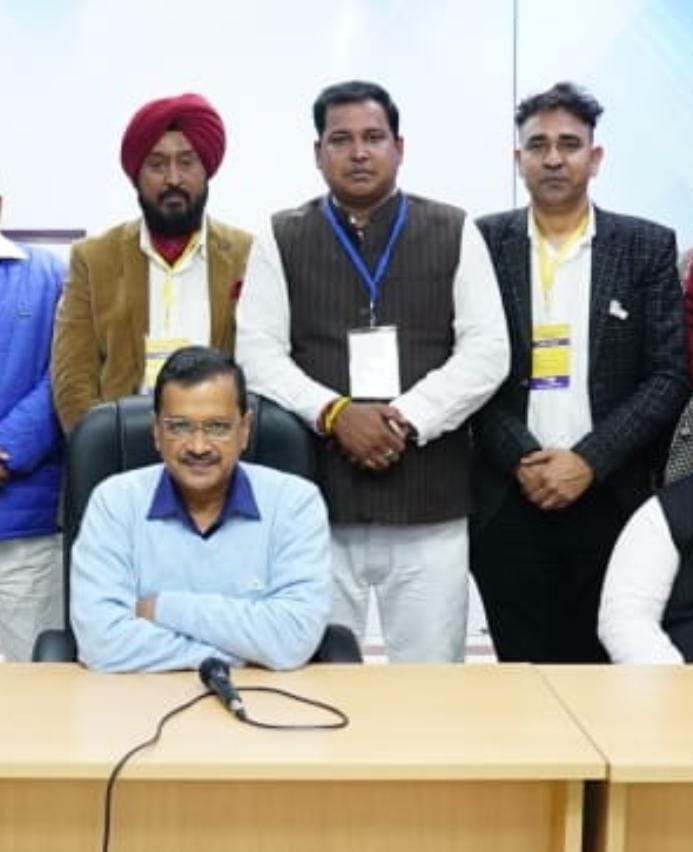 JAMMU: The office bearers of the Jammu and Kashmir unit of Aam Aadmi Party called on AAP national convener and Delhi Chief Minister Arvind Kejriwal at the national capital on Tuesday and apprised him of the situation in the union territory.

The delegation led by Raj Salaria discussed the current political scenario in J&K with Kejriwal and also apprised him of various education, health, and unemployment related problems being faced by people in J&K.

“There is a trust deficit between the public and the Administration. There is no accountability at all and the common people have no access to the bureaucrats. Promises of development, employment along with protection of our cultural identity and rights of the locals are getting razed,” he told.

“It is our right that on the lines of northeast and other border states of the country, J&K should also be given privileges under Section 371,” Raj Added.

During their meeting with Kejriwal, Raj also discussed the upcoming Panchayat, Municipal and J&K assembly elections strategy. He also shared the information with regard to Delimitation in J&K wherein BJP apparently tried its best to exploit the situation and its position in favour of the party.

Raj gave detail about possible benefit to AAP in the pocket of Jammu region in the coming elections and also discussed unemployment issue being faced by the educated youth of the J&K, saying that unemployed youth are strongly against the present dispensation.

“This segment is needed to be taken into confidence. It can render good support to the party if some good commitments are made for their better future,” he told Kejriwal.

Besides this, several other burning issues of J&K were discussed with Kejriwal by Raj Salaria, a spokesmsan said.

Arvind Kejriwal assured his full support to these genuine issues and also appreciated AAP Jammu and Kashmir for their continuous efforts to raise the genuine issues of the people of the region.

What took you so long: BJP asks Rahul on snub to Digvijaya
Avalanche warning issued in 3 districts in Kashmir
Comment