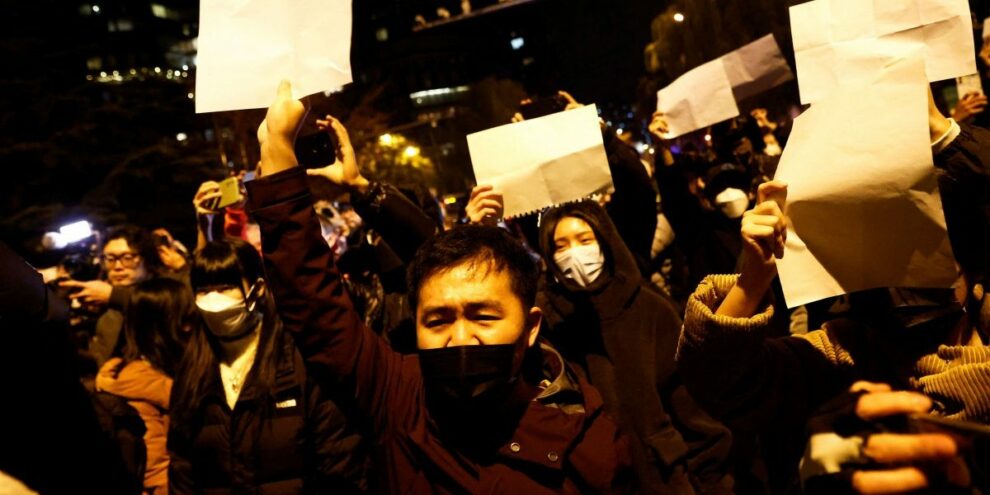 Our COVID-19 policy is the most scientifically effective, the most economical, and yields the best result,” insisted the People’s Daily newspaper in China after mass public protests against the Government’s ‘zero Covid’ policy last weekend. If President Xi Jinping believes that, he is in for a lot more trouble. The protests were unprecedented in their scale and daring. They broke out spontaneously in twelve cities all across China after ten lockdown-related deaths in the remote province of Xinjiang. All sorts of people took part, from students to workers to pensioners. A few even called for the dethroning of Xi and the Communist Party. That doesn’t mean the regime is on the brink of collapse. Public anger at the endless lockdowns and resulting loss of income is strong, but the regime’s surveillance technology is excellent. There was relatively little official violence last weekend. Xi’s problem is that the protests will probably recur and may well escalate, because over-long mass quarantines and lockdowns are a non-political issue that can unite almost everybody against the government’s policy. Or rather, against Xi’s personal policy, for he has deliberately chosen to portray zero-Covid as the greatest achievement of his time in office. That made sense in the first year of the pandemic, for China’s relentless lockdowns and mass testing campaigns saved a great many lives then. Total Covid-related deaths in China have been around 5,000 out of a population of 1.4 billion. Xi and his propagandists naturally used this contrast as evidence that both Chinese medicine and the Chinese political system were superior to their Western equivalents. Was he even aware that the zero-Covid policy could only be a stopgap measure until effective vaccines were developed, never a lasting solution? His scientists must have tried to tell him that, but somehow he didn’t take the message on board. There was a vaccination programme, but not a very rigorous one—and Xi kept chasing the fantasy of completely eliminating the Covid virus. He is caught in a trap, but he built it himself. “Lockdowns should always be a temporary phenomenon, not a long-term strategy,” explained Dr Anthony Fauci, now President Joe Biden’s chief medical adviser. Continuing them for almost three years “without any seeming purpose or endgame” is sheer folly. Moreover, Xi seemed unaware that the Covid virus was growing more infectious with time. The latest versions of the omicron variant, which first appeared a year ago, are estimated to be up to ten times more infectious than the original virus that appeared in Wuhan in late 2020. Those versions haven’t reached China yet, due to drastic curbs on travel into and out of the country, but the Chinese population is so poorly protected that the only alternatives if they arrive would be semi-permanent nationwide lockdowns or nationwide carnage. Chinese-made vaccines are only 70 per cent effective against earlier variants of the virus, and may be wholly ineffective against the later omicron versions. The elderly are particularly vulnerable: only 40 percent of the over-80s have had even a single booster shot. An article published in Nature Medicine last March estimated that ending the Covid-zero lockdowns and quarantines in current circumstances could overwhelm hospitals, with 15 times more people needing hospital beds than those currently available. It predicted around 1.5 million deaths. That would still be a far better outcome than the US record, but arriving all at once so late in the game, when the rest of the world is long past lockdowns and mass deaths, it could spell political disaster for Xi Jinping. Perhaps even for the Communist regime. There is a way out. First, Xi has to eat humble pie and import several billion doses of the highly effective mRNA vaccines. Let’s say six months for that. Then he has to control the rising infections with the hated lockdowns and quarantines as best he can, containing popular anger as much as possible, until a high enough portion of the population is properly vaccinated – say another six to twelve months. Then, sometime in 2024, he can relax the restrictions and let the Chinese rejoin the rest of the world. That strategy worked for the Australians and New Zealanders, who ended similar mass lockdowns as soon as most people got their (imported) mRNA vaccines. If Xi can’t bear the humiliation of doing that, he could gamble that an effective Chinese-made mRNA vaccine will become available soon. Several are under development, and one is allegedly about to enter Phase 3 clinical trials. But if he bets on that and it’s not ready soon, his newly acquired status of de facto president-for-life will become a nightmare. Covid infections are rising fast.