Srinagar, Jan 19: Jaish-e-Mohammed (JeM) militant and an Over Ground Worker (OGW) were arrested alongwith arms and ammunition at separate places in south Kashmir district of Anantnag.

Official sources said that following specific information about militants planning to kill police personnel and snatch weapons, a joint team of Army and police established checkpoints at various places in the district. “Security forces arrested a recently recruited JeM militant, identified as Ayaaz Ahmad Bhat, at one of the checkpoints alongwith one Chinese Pistol, one Magazine and 7 live rounds,” they said.

They said acting upon another information that militants are planning to lob a grenade in Anantnag town, surprise nakas were established at multiple places. “During the checking, one militant associate of JEM, identified as Rayees Ahmad Mir was apprehended at Mehendi Kadal and one hand grenade was recovered from his possession,” they said.

“In this regard case FIR No 12 of 2021 under relevant sections of law has been registered in Police Station Anantnag,” he added. 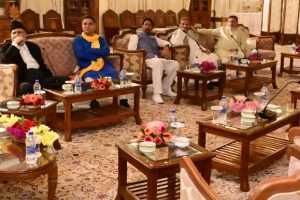