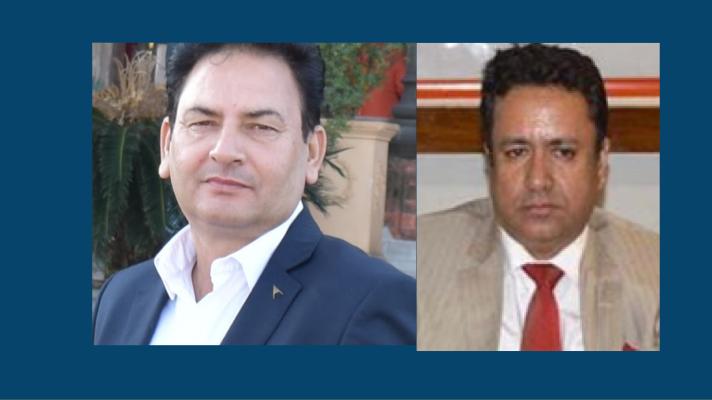 On Sunday Lieutenant Governor Manoj Sinha launched a range of activities, products, programmes and policies for Tribals. This included Tribal Chair at IIT Jammu and BGSB University, ambulance service and training of tribal youth in stock exchange. These works done under Dr Shahid Iqbal Chowdhary, Secretary, Tribal Affairs, earned him widespread appreciations. On the occasion first ever tribal awards were also conferred upon members of the community who made notable contributions.

However, Chowdhary Zulfkar took to Twitter to call Tribal Affairs Department “shameless” and made personal attacks on Secretary Shahid. He tried to instigate people by mentioning the plight of nomads in the highland pastures who suffered losses for recent incessant rains. Zulfkar, in his many social media posts and fixed interviews, has been holding the Tribal Affairs Department and Shahid Choudhary personally responsible for unexpected rains and subsequent loss of nomads.

This may be mentioned here that tribal migration to the high pastures is a centuries old practice. The Tribal Affairs Department, of which Zulfkar was the founder Minister in 2015, was never design to regulate and secure the migration. In view of any calamity, it is the role of respective district administration and the Disaster Management Authority to reach out to nomads with with measures.

Despite knowing this well that Tribal Affairs Department is not a rescue and relief agency, Chowdhary Zulfkar has made critical propaganda against the department his daily routine.

Responding to his latest post which many found obnoxious, misleading and blatantly biased, noted scholar Javed Rahi reminded Zulfkar that rescue, relief and other matters are with Deputy Commissioners. He pulled him up further saying, “did you not hear it in the speech of Lieutenant Governor?”

Tribals have multiple issues, Rahi said further explaining that one issue can’t be made hostage to other. “You must rise above your personal issues”, Rahi asked Zulfkar in a politely sounding hard hitting advice.

Javed Rahi is an expert of national repute on matters related to tribal communities. He is author of dozens of books, a motivational speaker and thought leader. He connects with the technology savvy youth like none else.
In another comment, a tribal student activist Rayees Choudhary also questioned biased and hateful propaganda of Zulfkar.

Rayees wrote: “May I know the year of foundation of Tribal affairs Department? Why it seem like it has been established months before?

Why is no mark of tribal department on ground before Mr Shahid took over? Also the tribal migration to upper reaches is a centuries old exercise, these losses happen every year..? Why wasn’t any permanent remedy given to them till now? It’s not a political question just asking for information.”

In response to Rayees, the former Minister stooped further low to say “you are not beneficiary of award”. Zulfkar was making oblique reference to the Tribal Achievement Awards instituted by Department under Shahid’s watch to celebrate outstanding works of the members of tribal community. This award series announced on Republic Day and given away yesterday by Lieutenant Governor have been widely appreciated by everyone.

“Your personal hate for an officer and your own shabby performance as Minister should not confuse the policy matters”, said another commentator who asked the community members to reject this nefarious propaganda”.
Every since senior IAS officer Dr Shahid took over as Secretary last year, Zulfkar has been running an organised propaganda against the Tribal Affairs Department. Besides writing on social media, and giving out multiple Facebook interviews on daily basis, he writes anonymous complaints to several authorities and agencies.

A founder Minister of the Tribal Affairs Department, Zulfkar appears to be running through an unnecessary jealousy against current performance of the Department despite the fact that it is not a political government at the moment and any political rivalry with administration is of no benefit. He pretends to be oblivious to unprecedented achievements of the Department which are widely hailed by members of the tribal communities.

“Highlighting the measures taken by the government for the welfare of the tribal community of J&K, the Lt Governor said, UT Government is working tirelessly for the holistic development of tribal communities, promoting entrepreneurship amongst tribal youth and women, tribal schools being transformed, village development, tourism, Van Dhan being implemented for their empowerment.

The Lt Governor announced that 500 tribal youths will be trained under the Financial Literacy Programme proposed by Bombay Stock Exchange and Punjab National Bank.

For the sustainable livelihood of the youth, the administration has set up mini sheep farms in the tribal areas. Efforts are being made to link the tribal youth with the dairy sector, besides programmes of skill development and vocational training has been launched to bring a large population into the mainstream economy, the Lt Governor said.

The Lt Governor said, after many years of wait, the Forest Rights Act was implemented by the government last year. The UT administration is setting up 100 Van Dhan Kendras in Jammu and Kashmir for sustainable livelihood of the tribal families.

The government is also starting 1500 Van Dhan Self Help Groups to make women of the tribal community financially independent and empowered, he further added.
On this historic occasion, MoUs were signed between Tribal Affairs Department and IIT Jammu and Baba Ghulam Shah Badshah University Rajouri for establishing Tribal Chair in both the institutes.

The Lt Governor termed the establishment of Tribal Chairs a milestone in academic research and preserving the cultural heritage of the tribal community. ‘It will bridge the gap in research, institutional support. The collaboration will work towards preservation of rare books, language styles, socio-cultural heritage and most importantly, the documented history can be digitized’, he added.