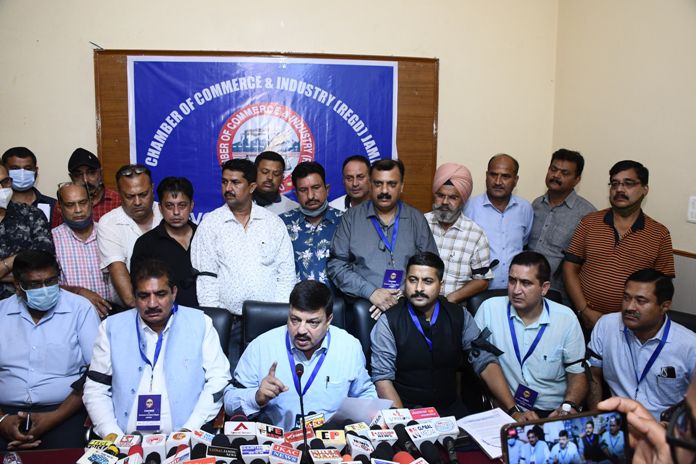 JAMMU: In the wake of opening 100 new Reliance Smart Points in Jammu, the premier traders body of the region, Chamber of Commerce and Industry (CCI), on Friday called for a ‘Jammu Bandh’ on September 22 to protest against the government’s “anti-traders” policy.

Addressing a press conference, president CCI, Jammu Arun Gupta said that the move is aimed at pressurizing the UT administration to stop torturing the Jammu traders.

“The Jammu and Kashmir administration is finding one way or other to harass the business community here. First, they sold mines to outsiders in the name of reforms, while the condition of wine traders and bar owners are in public domain,” Gupta said, adding that investment of thousand cores has gone to vain due to these anti-Jammu policies which also adds to unemployment.

Gupta said that the administration is now planning to come up with Reliance Marts, which will affect the livelihood of thousands of small Karinya merchants, shoe vendors, medicine agencies, and people associated with furnishing and glossary stores.

Criticizing the ban on Darbar Move practice, Gupta said that Jammu’s traders are already suffering at multiple fronts and Darbar Move is one among them.

“Government says that it saves Rs 200 by stopping darbar move, but it also barred the investment of over Rs 1000 crore which people of Kashmir do in Jammu during their six months stay,” Gupta said. “It also barred cultural exchange, which is mandatory for society to grow and develop.”

“To protest all these issues, the chamber is going to hold a complete Jammu Bandh in the province, where all types of shops will remain closed,” Gupta said.

It is for the first time in about three years, a call has come from the business community for complete shutdown of Jammu city. Chamber of Commerce and Industry represents more than twenty-two trade and industry lobbies in Jammu.