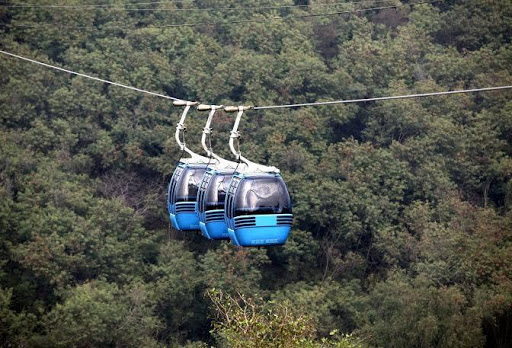 Jammu: The work of the ropeway project from Mohamaya Temple to Pirkho is almost complete and will be commissioned soon.

This was said by Dr Raghav Langar, Divisional Commissioner, Jammu, during the inspection of the ropeway site. He said that the work of ropeway is in the final stage.

The 1.66 km long rope-way cable car project will be completed in two phases. The first phase is from Bahufort to Mohamaya Park and the second from Mphamaya to Pirkho.

In the ropeway passing over the Tavi river, people will also be able to enjoy the views of Suryaputri.

The first phase has already started. It was launched on 27 July 2020. Till date 2100 passengers have visited the cable car. The Divisional Commissioner also sat in a cable car and inspected.

He also reviewed the restaurant, view point, technical section and other facilities here. He directed the members of the Rope-Way Inspection Technical Committee to expedite the commencement of the project.

This project will entice tourists to Jammu. Eight cabins have been installed from Bahufort to Mahamaya in which people are sitting and taking a walk.

There will be 14 cabins from Mohamaya to Pirkho. Six people will be able to sit in these. 9 towers have been built from Bahufort to Pirkh0.

These cabins have been sourced from Turkey and Switzerland. 75 crore is to be spent on the entire project. With the commencement of the second phase of the project, Bave Wali Mata, Mahamaya Temple and Pirkoh will be connected and this will give a boost to tourism.

With its completion, this project will become an important cable car project of Jammu. At the same time, the officials told Div Com that the DPR of the second phase project has already been prepared. In this, provision has been made to provide better facilities to the people.

Attempts are being made to lure tourists by connecting the historic Mubarak Mandi with Pirkho. The Div COm also emphasized to the authorities the convenience of parking the passenger’s vehicles.