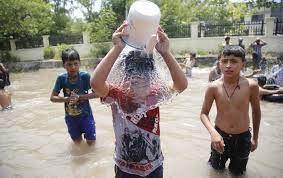 Jammu: Jammu, the winter capital of Jammu and Kashmir, on Wednesday recorded the hottest day of the season at 35 degrees Celsius nine notches above the normal for this part of the season, an official said.

The summer capital Srinagar also recorded a high of 25.4 degrees Celsius which is 10.7 degrees above the normal, a spokesperson of the Meteorological department said.

The official said Katra, the base camp for the pilgrims visiting Vaishno Devi shrine, was reeling at a maximum of 32.6 degrees Celsius.

He said the town in Reasi district recorded the minimum temperature of 18.2 degrees Celsius, which was the highest in any recorded place in the Union Territory.

Srinagar recorded a minimum of 7.9 degrees Celsius, which was 3.7 notches above the normal.

The rising temperature over the past few days, especially in the snow-bound areas of Jammu and Kashmir, has caused early melting of the snow causing concern among the people, especially the agriculturists who fear water shortage in the coming months.