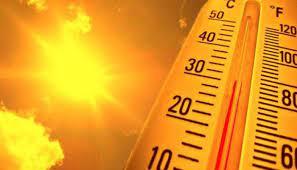 JAMMU: Jammu recorded the hottest day on Sunday with the mercury rising to 38.6 degrees Celsius – eight notches above the average during this part of the season, an official said.

The meteorological department announced a one-off heat wave in the region as the minimum temperature in the city also settled 3.9 degrees above normal at 21.7 degrees Celsius.

Most parts of Jammu and Kashmir have recorded hotter days over the past month with Srinagar recording a high of 27.2 degrees Celsius – 8.7 notches above normal on Sunday. The city recorded a low of 10.0 degrees Celsius which was also 3.1 degrees above average.

Katra, the base camp for the pilgrims visiting Mata Vaishno Devi shrine, recorded a day temperature of 35.6 degrees Celsius and a night temperature of 20.2 degrees Celsius, the MET department official said. Director Meteorological department Sonam Lotus said the union territory has recorded a deficient rainfall of 80 per cent due to the absence of any strong western disturbance in the month of March this year.

The absence of strong western disturbance and a stable atmosphere caused the weather to remain fair and mainly clear on most occasions which led to the early onset of spring and above normal temperatures compared to the last few years, he said. The official said the mean temperature in Jammu city in March was 23.3 degrees Celsius, which is quite high but not unusual, as mean temperature even touched 24 degrees Celsius in 2004 and 2010.

The mean temperature in Srinagar city in March was 13.7 degrees Celsius, which too is high but not unusual, as it has been recorded to have touched 13.6 and 13.7 degrees Celsius in 2004 and 2010, he said. Lotus said a brief spell of light rain is likely between April 13 and 14 at scattered places, but mostly the weather is likely to remain dry for the next week. (PTI)