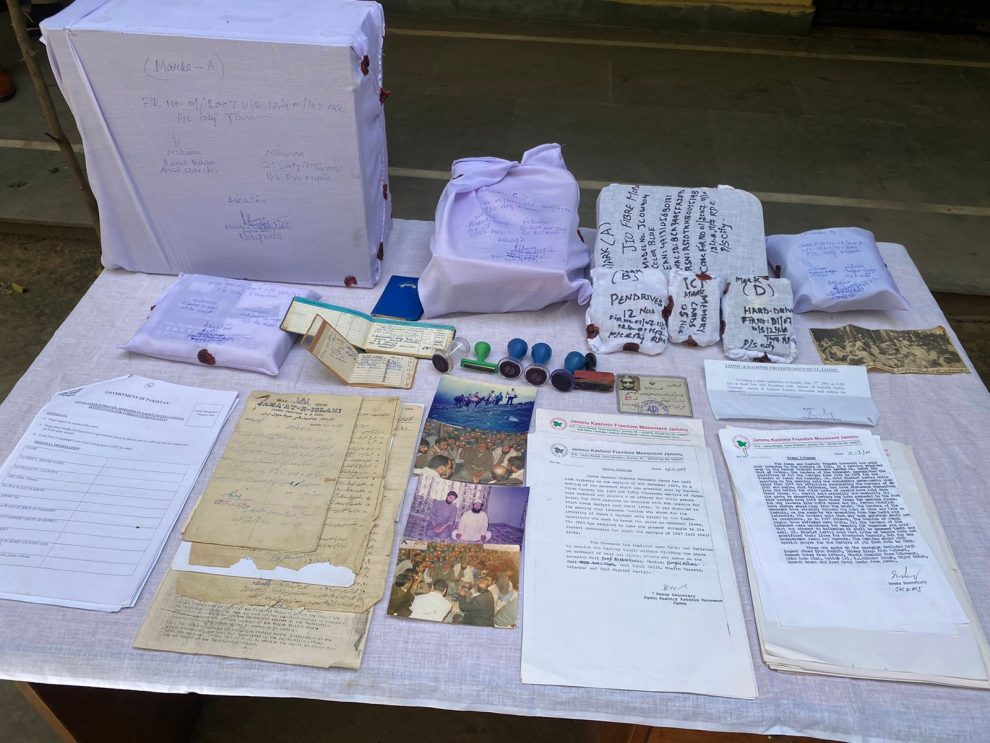 JAMMU: Jammu and Kashmir police in Jammu district recovered several vital documents and some other incriminating material during raids that were conducted in parts of Jammu city during investigation and legal procedure of a case that was registered in the year 2007.
The case in 2007 was registered in FIR 01/2007 U/Ss 124-A, 147 RPC of PS City Jammu after objectionable and sensitive slogans were raised during visit of Sayeed Ali Shah Geelani.
The investigation and legal proceedings of this case were going on with two accused namely Rayees Ahmed Malik son of Late. Mohd Sadiq Malik resident of Dalpatia Mohalla Jammu and Mohd Sharif Sartaj son of Shamas Ud Din resident of Bhallesa Doda, at present Khatikan Talab Jammu, were evading their arrest.
SSP Jammu Chandan Kohli said that after issuance of house search warrants by Judicial Magistrate, special teams of Jammu police conducted raids at the houses of both these accused wanted in case of 2007 in Dalpatia Mohalla, Sunjawan and khadika talab.
The house premises of duo were searched by police teams in presence of Executive Magistrate during which several sensitive documents, incriminating material have been recovered. The raids were conducted by teams of North and South zone by officers Rakesh Kumar SHO City , Sharad Kalu, SDPO north Jammu, Rahul Nagar SDPO West , Sachit Sharma, SDPO South under supervision of Mamta Sharma SP South and Kulbir Handa SP North Jammu.
The seized material includes Jamaat e Islami (Banned Organization) literature related to Doda region, forms for medical admission in Pakistan, a report regarding a person namely Abdul Rehman who was a Pak national who visited the area and was later deported, literature related to Jammu Kashmir freedom movement, a phone diary containing Pakistan numbers, cash register regarding various accounts , an identity card pertaining to Iran, Photographs with Jamaat e Islami leadersz meeting notices regarding Jammu Kashmir freedom movement and stamps regarding Jammu and Kashmir freedom movement.
SSP Jammu Chandan Kohli said that a fresh case in Police Station Peer Mitha 27/2022 U/S 10,13 and 39 UAPA has been registered over recovery of incriminating material related to a banned organisation and further investigation and legal proceedings into the matter are going on.