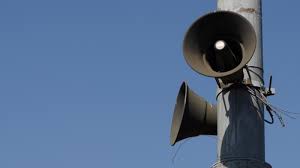 JAMMU:  The Jammu Municipal Corporation (JMC) today passed a resolution against the noise pollution caused by loudspeakers amid chaos by opposition members.
The resolution was moved by BJP councilor Narotam Sharma. The BJP councilor, in his resolution, demanded that all illegal loudspeakers and public address systems be removed from all religious places in Jammu in order to prevent noise pollution.
The resolution has been passed with a majority. Now, the implementation will be done as per #SupremeCourt‘s ruling: Chander Mohan Gupta, Mayor, Jammu Municipal Corporation said on a resolution against #NoisePollution caused by #loudspeakers
The Dispatch is present across a number of social media platforms. Subscribe to our YouTube channel for exciting videos; join us on Facebook, Intagram and Twitter for quick updates and discussions. We are also available on the Telegram. Follow us on Pinterest for thousands of pictures and graphics. We care to respond to text messages on WhatsApp at 8082480136 [No calls accepted]. To contribute an article or pitch a story idea, write to us at [email protected] |Click to know more about The Dispatch, our standards and policies