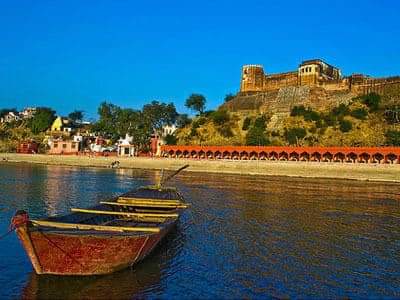 Akhnoor is a town of Jammu district in the UT of Jammu & Kashmir, India. Located 28 km from Jammu, Akhnoor is located in the foothills of the Himalayas. It is an extremely beautiful town. The picturesque town is located on the banks of the Chenab River. The Akhnoor Tehsil is divided into two Revenue Blocks – Akhnoor & Khour. Akhnoor is also divided into three Education Zones of Akhnoor, Khour & Chowki Choura.

Akhnoor has historical places to visit, such as the caves where the Pandavas stayed during their exile. Close to the town there is a Parashurama temple where Parashurama Jayanti is celebrated annually, on the same day in May as Akshaya Tritiya. The border is around 18 km away by road, but the aerial distance is only some 8 km. There is a beautiful park built on the bank of Chenab stretching from Jiya Pota Ghat to Parashurama Temple. It looks like a glittering necklace during the late evening and during night hours under beautiful lights on the bank.

It was on 17th of June 1822 A.D. that the magnanimous Maharaja Ranjeet Singh, the most powerful king in the realm of Hindustan coronated Gulab Singh as Raja of Jammu region at Jia Pota in the backdrop of Akhnoor fort and lapped by the icy waves of Chenab. To commemorate the coronation day of Maharaja Gulab Singh, a commemorative tablet has been installed at the ghat depicting the scene of Raj Tilak.

The Akhnoor fort which lies towards east of the town, on the bank of the Chenab river holds great significance and is extremely important for reconstruction of the past history. The fort was built by Raja Alam Singh in 1802. Work on the fort, actually began in 1762 at the behest of Raja Tegh Singh and was completed by his son Raja Alam Singh in 1802.

Ambaran in Akhnoor, a place considered the norther-most border of Harappan civilization.

The excavations at the site started around 1990 even though a lot of terracota figures ( 7th century A.D.) now known as “Akhnoor Buddhist terracotta heads with Greeco-Roman influence” had been found in Akhnoor around 1950s.

Historians consider Akhnoor as the northernmost point of Indus Valley civilization. Just imagine Harappans navigating river Chenab and using river front at Jia Pota to reach their flourishing settlement at Manda which is presently inside the Akhnoor fort.