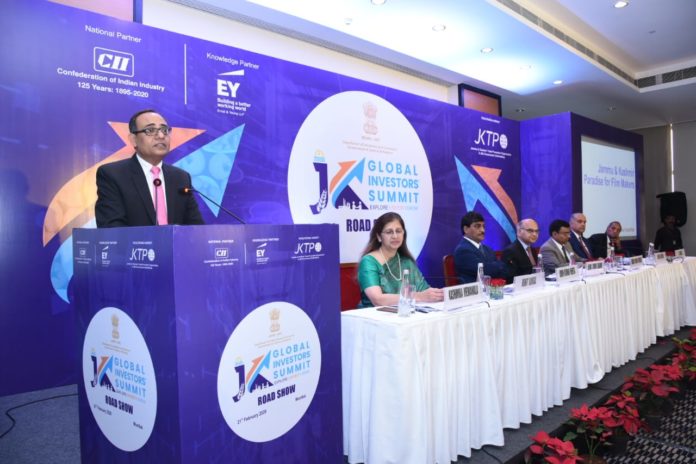 The Jammu and Kashmir Government has organised this road show with a view to invite investors for setting  up Film studios, Film Cities, Film Institutions, Multiplexes with film exposed workforce as per new draft Film and Tourism Policy.

A series of round-table discussions led by Administrative Secretaries and HODs were also organised on strategic sectors to seek investment for maximizing industrial growth and enhancing employment opportunities.

A video filming the investment potential of J&K was played followed by a detailed presentation by Manoj Kumar Dwivedi, Commissioner Secretary, Industries & Commerce who highlighted 14 Focus sectors and initiatives taken by Government to improve industrial ecosystem in Jammu and Kashmir. It was followed by a video on pristine locations and tourism potential of Jammu and Kashmir which received wide appreciation from participants. Rohit Kansal, Principal Secretary Planning Development/Monitoring and Information made a presentation on Film Tourism. 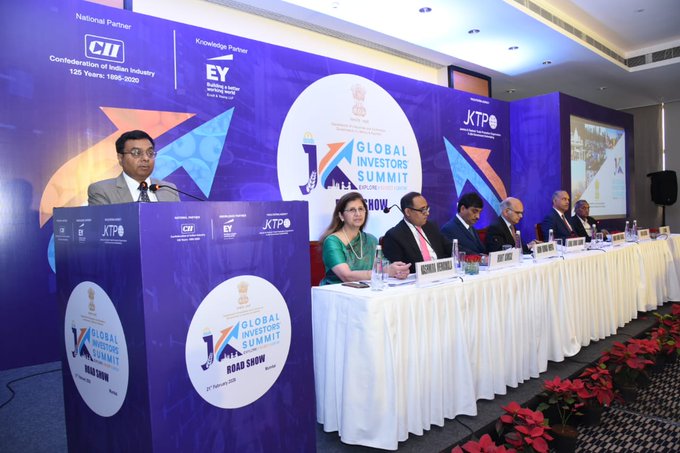 Kewal Kumar Sharma, Advisor to Lieutenant Governor, Jammu & Kashmir applauded the investors for exuberance towards J&K government and asserted that J&K is ready for investment in view of attractive 14 sector specific policies.

Arun Kumar Mehta, Financial Commissioner, Finance, informed about status of economy of J&K, highlighting the growth in GST which at present is 40%. He emphasized upon huge scope and space for private sector investment in J&K.

Kashmira Mewawala, Chairman, CII Maharashtra State Council, while addressing the participants focussed on the strengths of J&K and briefed the audience that J&K has shown immense interest in providing an enabling environment and tap available opportunities, in the road show.

Vinod Haritwal, CEO Director Grauer and Weil (l) Ltd, shared his experiences of working in J&K on the occasion. He strongly allayed apprehensions of security related disturbances on the growth and profits in industrial sector in Jammu and Kashmir. S K Bansal prominent industrialist in J&K also shared the dias.

The event was attended by more than 150 delegates. More than 30 B2G meetings were held across various sectors in which 24 MoUs valuing about Rs. 2450 crores were signed during  the road show.

The upcoming road shows will further cover other industrial and economic hubs like Hyderabad, Chennai, Ahmedabad in March 2020 which have been planned with an intent to draw together business hubs, investors, decision-makers, senior government officials and the local business community in a stimulating dialogue that spurs the investment and economic development of Jammu and Kashmir

The road shows are being organised by Jammu and Kashmir Trade Promotion Organization (JKTPO), a nodal agency working under department of Industries and Commerce, Government of J&K, along with Confederation of Indian Industry (CII) as the National Partner, PricewaterhouseCoopers (PwC) as media partner and Ernst & Young as the Knowledge Partner.