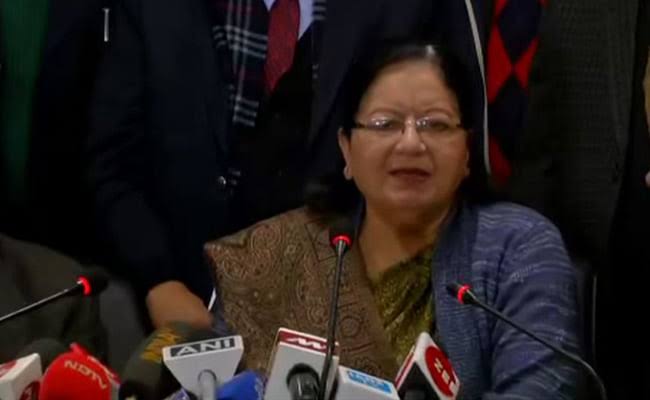 Jamia Millia Islamia Vice-Chancellor Najma Akhtar on Monday said that the university administration will file an FIR against Delhi Police for forcibly entering the campus and allegedly destroying property.
“We will file an FIR against the entry of police personnel on our university campus without permission. You can rebuild the property but you cannot compensate for the things the students went through. We demand a high-level inquiry into the incident,” Akhtar said at a press conference here. “How will all this be compensated? There has been an emotional loss as well. Yesterday’s incident was unfortunate. I also appeal to everyone to not believe in any kind of rumours,” she added.
Akhtar also dismissed rumours that students had died in the violence that took place on Sunday.
“There has been a strong rumour that two students died, we deny this totally, none of our students has died in the incident. About 200 people were injured, of which many were our students,” she said.
University Registrar AP Siddiqui said that the police officials have denied the rumour that students were fired upon during the incident.
“We talked to the Police Joint Commissioner and other senior officials about it, and they have strongly denied this rumour. There are many rumours being floated on social media. We can’t confirm or deny all of them,” Siddiqui added.
The press conference was held after an executive council meeting in the Vice-Chancellor’s office over yesterday’s violence. The Vice-Chancellor, Registrar, senior professors, associate professor and four government nominees were among those present in the meeting.
The meeting came after several students were injured after a protest against the new citizenship law turned violent in Jamia Nagar area on Sunday.