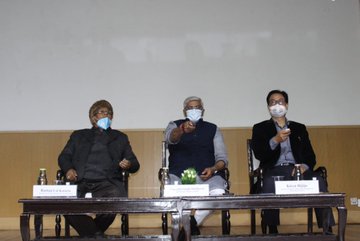 National Water Mission under Ministry of Jal Shakti in collaboration with Nehru Yuva Kendra Sangathan under Ministry of Youth Affairs and Sports has launched the JSA II: Catch the Rain Awareness Generation Campaign in New Delhi. The campaign was launched jointly by Jal Shakti Minister Gajendra Singh Shekhawat and Youth Affairs and Sports Minister Kiren Rijiju. The launch event was attended by large number of participants on digital platforms including field functionaries of NYKS in all the districts of the country.

Mr Shekhawat emphasized on the need to focus on water conservation and rainwater harvesting while Mr Rijiju stressed on the importance of involving the youngsters in the revolutionary campaign. The Ministers collectively unveiled the posters and Information, Education and Communication IEC material promoting Catch the Rain campaign.

As a preparatory phase of JSA-II, the Ministry has involved Nehru Yuva Kendra Sangthan for undertaking ‘Catch the Rain’ awareness campaign to cover 623 districts. The awareness generation phase of campaign will run from mid-December 2020 to March 2021.