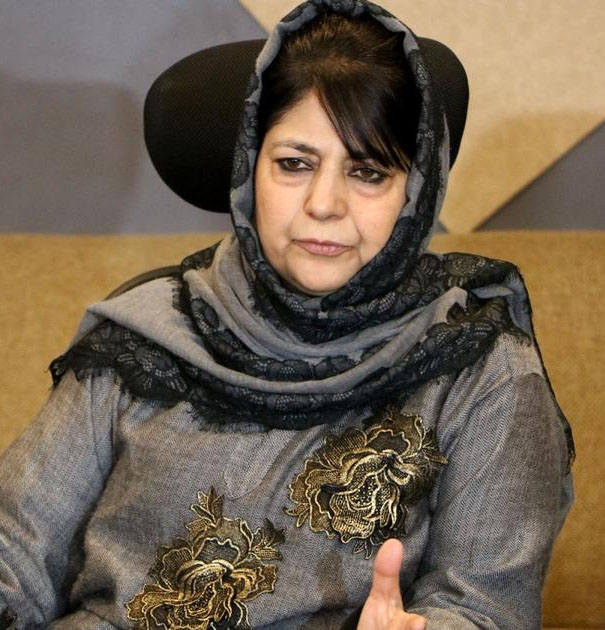 The Dispatch Staff
Add Comment
‘Mournings have sadly become the norm & a daily ritual in Kashmir’, Mufti had tweeted.

JAMMU: The state BJP unit in Jammu on Friday criticised former Jammu & Kashmir chief minister Mehbboba Mufti saying that her statement on the recent deaths in Kashmir and her sympathy with artist Ambreen who had been killed by militants expose the double standards of Kashmir politics.

“She is keeping friendship with wolves and also shedding crocodile tears for sheep killed by wolves,” J&K BJP chief spokesperson Sunil Sethi said in a statement. Before making such statements, Mufti must realise that it is her tactical and political support that has brought destruction to Kashmir, he added.

Expressing concern over the deteriorating situation in Kashmir, Mufti had tweeted on Thursday, “In Kashmir, mournings have sadly become the norm & a daily ritual. Countless innocent civilians are killed in one way or the other & devastated families are left behind to pick up the pieces. What will it take for GOI to recalibrate their J&K policy to end this bloodshed?”

“GOI keeps blowing its trumpet of normalcy in J&K even when such gruesome incidents suggest otherwise. My heart goes out to Ambreen Bhat’s family & pray her nephew recovers swiftly,” she had said.

Sethi said that an attempt to bracket terrorists and their victims in the same line is unfortunate. The solution to the problem lies in finishing the terror network in Kashmir once and for all so that lasting peace comes to the Union Territory, Sethi added.

The conviction of Kashmiri separatist leader Yasin Malik is a strong message, Sethi said. “Now that largely, peace has returned, and people especially in the Valley are happy with the return of tourism, it is not being digested by these leaders who had been surviving politically on death and destruction,” the statement said.

Sethi also praised the administration and security forces’ efforts to enforce law and order in the Union Territory.