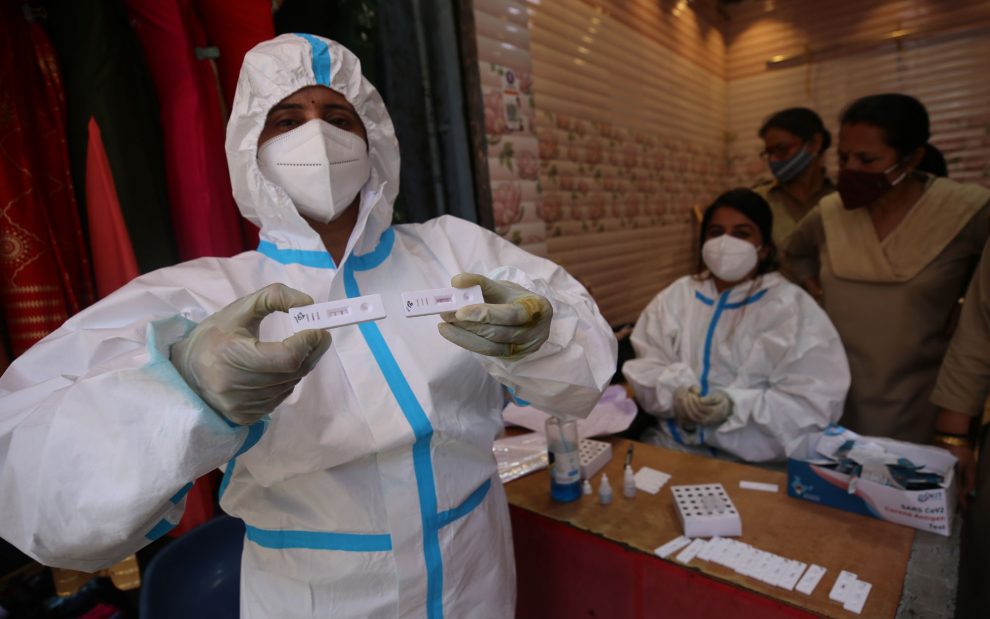 Srinagar: After witnessing major shortage of vaccines, Jammu and Kashmir’s daily COVID-19 testing has dipped by about 21 per cent between May 9 and May 16 while the average positive cases in a day during this time has remained above 10 per cent in the Union Territory.

Meanwhile, the COVID vaccination drive has almost come to a halt with only 815 jabs administered since May 13 in Kashmir valley, where most of the centers have been closed following shortage of vaccines. According to official data, not even a single person has been given COVID vaccine in Srinagar, Anantnag, Pulwama, Kulgam and Kupwara during the last five days.

The Jammu and Kashmir administration on Sunday prolonged the ‘COVID curfew’ by another week till May 24 in all 20 districts in the Union Territory. This was the fourth successive extension of COVID curfew in the valley since April 29.

According to data as many as 48,553 COVID tests were conducted in the UT on May 9, when 5190 fresh Coronavirus cases were reported. So, the positive cases reported with relation to the number of tests conducted was 10.68 per cent.

The data revealed that when the summer capital, Srinagar, recorded the lowest number of fresh positive cases in 20 days at 379 cases on May 14, only 31,552 tests were conducted, which is 28.82 per cent less than May 13.

In total, between May 9 and May 16 as many as 3,16,780 tests were conducted in the Union Territory, of which 32,866 tested positive, keeping the average positive cases with relation to the number of tests conducted above 10 per cent.

Experts believe that the dip in the testing has resulted in less positive cases in the Union Territory, particularly Srinagar, where people alleged that most of the testing facilities were closed between May 13 and May 15. “I went to the testing centre for two day — May 14 and May 15 — in Budshah Nagar, Natipora and then to Chanapora but it was closed. I then went to the main centre at Batamaloo, but it too was closed. So, finally I got the test done privately,” Javeed Saleem, a resident of Nayakbagh in uptown Srinaga said.

He said his mother, who is in her 60’s and is diabetic, has been making rounds to the vaccination centers around their locality from the last over 20 days without any results. “The people at the centre say that the vaccine is not available… and ask us to checkup in few days… but they have been giving the same answer every time we go there,” he alleged.

“Where are the 1.24 crore vaccine jabs that the J&K administration had procured,” he asked.

Similar allegations were made by people from different parts of the valley.

Meanwhile, during this time J&K also recorded 477 deaths, including 300 from Jammu and 177 from Kashmir. However, Doctors Association Kashmir (DAK) has alleged that the official figures of Coronavirus deaths are being ‘underestimated’ in the valley. “The official figures of COVID-19 deaths are an underestimate as many deaths due to the virus go unreported in the valley. Only those deaths make it to the official count that has been confirmed as COVID-19 through RT-PCR testing. But the test can miss more than 30 per cent of positive cases,” DAK president and influenza expert Dr Nisar-ul-Hassan said last week.

The DAK president said that many COVID deaths are hidden among other diseases and alleged that many patients with heart or lung disease die of COVID, but their death is attributed to their underlying condition.

Dr Hassan said that many people with COVID symptoms don’t get tested for the virus because of the fear of stigma and quarantine of family members. “Social stigma makes people hide their illness and keep them away from seeking health care,” he said.

He said that people fear that if they die of COVID-19, they will not get decent burial and only few will come to their funeral. “As a result, people are choosing to die at home, unrecorded,” he said.

“Accurate data is vitally important for appropriate response which is key to mitigate further disaster,” he said, adding to deal with the problem, we must understand how bad it is.

MoS in PMO, Dr Jitendra Singh calls for united fight against COVID-19 saying it is time to rise above politics
ONGC to procure one lakh oxygen concentrators on behalf of Govt of India
Comment