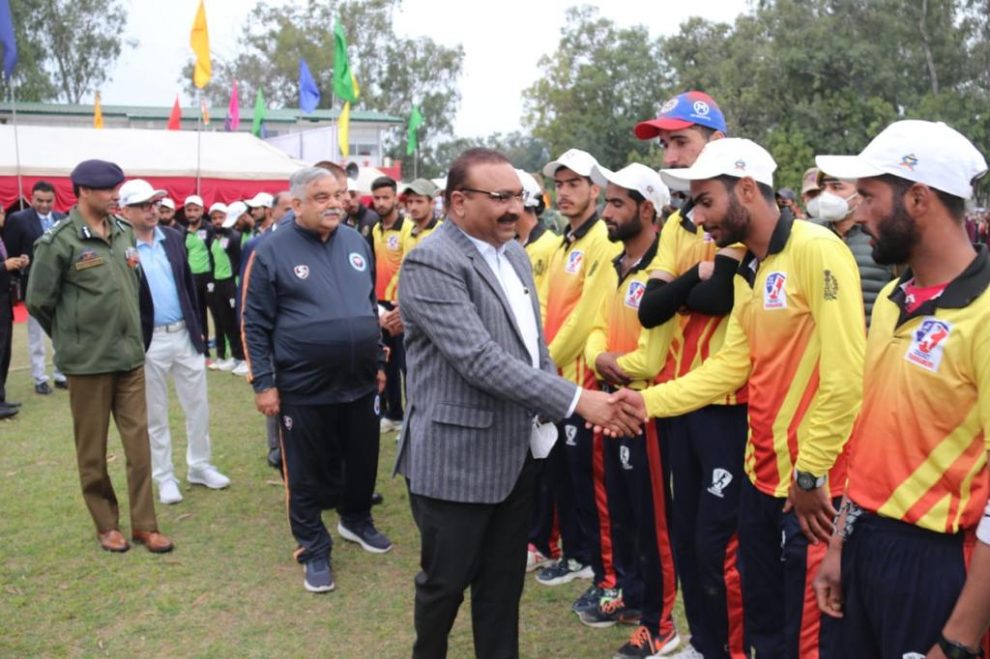 Says sports are a tool to promote peace, tolerance, understanding, brings people together

JAMMU: The UT level under 19 cricket tournament organized by J&K Police concluded today with Jammu Dare Devils winning the title. Director-General of Police Dilbag Singh, who was the Chief Guest on the occasion distributed prizes/ trophies among the winner and runner up teams.

The DGP while speaking on the occasion appreciated the ADGP, Armed, his team and associated members for organizing the event successfully. He congratulated the winning and runner ups teams and advised them to rejuvenate their energy to further polish their skills to perform at higher levels of competitions. “J&K Police is your own police and we will always be there to assist and support you”, the DGP added.

He said that Jammu and Kashmir Police is always ready to guide and assist youth to excel in different sports. Citing the example of Sadia Tariq who won the Gold medal in the recently held Wushu Starts Championship in Moscow Russia, the DGP said that J&K has lot of potential and talent. He congratulated Sadia for bringing laurels to the country and UT.

Shri Singh said that soon after the 2nd wave of COVID -19 J&K Police organized mega sports events including cricket tourneys across Jammu and Kashmir. Fifty to sixty thousand youth of JK participated in these events, the DGP informed. Terming the participating teams as ambassadors of peace, Shri Singh said that sports is a tool to promote peace, tolerance, and understanding, bringing people together across cultures, and regions. The DGP said that sports can be utilized for further strengthening of solidarity and social cohesion. Sports also promote equality and serves as a platform to promote the values of diversity.

He said that enemies of peace are making continuous attempts to create disturbance in J&K and added that it is our collective responsibility to foil their evil intentions. The DGP said that J&K Police has proved successful in its mission because of the support this force is receiving from the people particularly the youth of Jammu and Kashmir. It is time when young generation has to come forward to spread the message of peace and love, the DGP added.

Speaking to the media, the DGP said Pakistan and its agencies are continuously attempting to launch terror modules here and added that Police and CAPFs have exposed dozens of such modules. He said that during last year around 85 terror modules involved grenade throwing, civilian killings and other different terror activities were busted. Referring to the killing of a civilian in Kulgam, the DGP said that it is shame for the terrorists and their masters. He said that Pakistan is making attempts to create disturbance here and added J&K Police and other security forces are continuously monitoring and foiling their evil designs. He said that attempts to create disturbance by planting IED in Jammu have been foiled and added that huge quantity of arms, explosives, grenade and other material have been seized recently.

Earlier the ADGP, Armed who was also the organizer of this event in his welcome address threw light on the importance of organizing the tournament. He said that JK Police is focusing to make a single team in which best performers of the all the teams participated in this tournament will be selected adding that they in future will be representing JK at different state and national level tournaments.

Pertinent to mention here that J&K Police organized U-19 cricket tournaments at district levels and the teams which emerged winners at this level took part at range levels. Subsequently, the teams which emerged winners at range levels participated at the zonal level. Then two top teams from Kashmir and each from Jammu zone took part in UT level tournament and final of which was played today between Kashmir Rising stars and Jammu Dare Devils. Jammu Dare Devils won the title.

Fresh snowfall in Gulmarg, Pahalgam; Night temperature above freezing point at most place in J&K
11K appointments in 18 months. How J&K is ensuring merit as sole criteria for Govt jobs
Comment