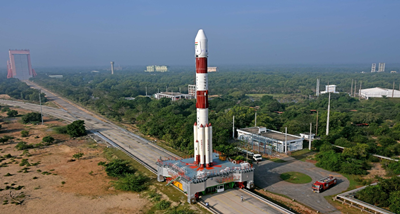 India’s new communication satellite CMS-01 is all set to be launched by India’s workhorse rocket PSLV-C50 in a little over an hour from now. The rocket carrying the satellite is scheduled to lift off at 1541 hrs from the second launch pad in the Satish Dhawan Space Centre at Sriharikota, subject to weather conditions. The launch mission will be completed in about 21 minutes from the time of its ignition.

Today’s flight will be the 52nd mission of the PSLV, and the 22nd in the XL-configuration. It will have six strap-on motors to provide the extra force to carry the heavy satellite into a geo-synchronous transfer orbit.

From the home soil, this would be the 77th launch for the national space agency ISRO. AIR correspondent reports that, today’s launch is considered a bread-and-butter mission, as it serves to meet the increasing communication requirements of the nation. It joins a host of other communication satellites of India in space to augment the available bandwidth capacity.

It will be the solo flight for the satellite CMS-01, as its lift-off mass and the altitude are higher. CMS-01 is a communication satellite envisaged for providing services in Extended-C Band of the frequency spectrum. Its coverage will include the Indian mainland, Andaman-Nicobar & Lakshadweep Islands. CMS-01 is the 42nd Communication Satellite of India that is said to be replacing the ageing GSAT-12.