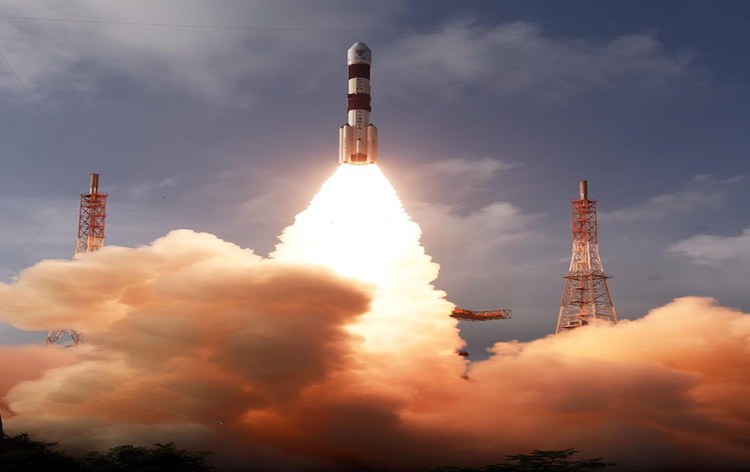 The Indian Space Research Organisation, ISRO, has successfully launched the country’s new communication satellite CMS-01 in the intended orbit in space. The workhorse rocket PSLV-C50 carrying the satellite lifted off from the second launch pad of the Satish Dhawan Space Centre, Sriharikota at 15.41 hours as planned. In just about 21 minutes, the launch mission was accomplished and the satellite was injected into the geo-syncronous transfer orbit.

The ISRO Chairman Dr K Sivan congratulated the team ISRO for the feat and said the solar panels of the payload have been deployed and it has been taken over by the Satellite Team of the national space agency. He said, it will be brought to the final orbit by December 21 after a series of the usual maneuvers to render its telecommunication service in the Extended C-Band.

Dr Sivan said the ISRO is actively involved in launching a series of satellites and probes in the days to come. They include the PSLV-C51 and the Small Satellites Launch Vehicle SSLV. He added, preparations for the prestigious missions like Chandrayaan-3, the Gaganyaan and the probe to study the sun called Aditya L-1 are also in full swing.

AIR Correspondent reports, the success of the mission PSLV-C50, overcoming all the logistical challenges brought by the COVID-19 pandemic, has paved the way for enhancing the country’s communication infrastructure, including her strategic and far-flung island territories. The next mission using the PSLV-C51 has an interesting feature, as it involves the first ever launch under the recently introduced space reforms initiatives known as the IN-Space, as explained by the ISRO Chairman Dr K Sivan.

The new satellite CMS-01 will take over the mantle from the ageing telecommunication satellite GSAT-12 that has outlived its planned operational period by rendering seamless service for 11 years. The CMS-01’s intended operational life is seven years.