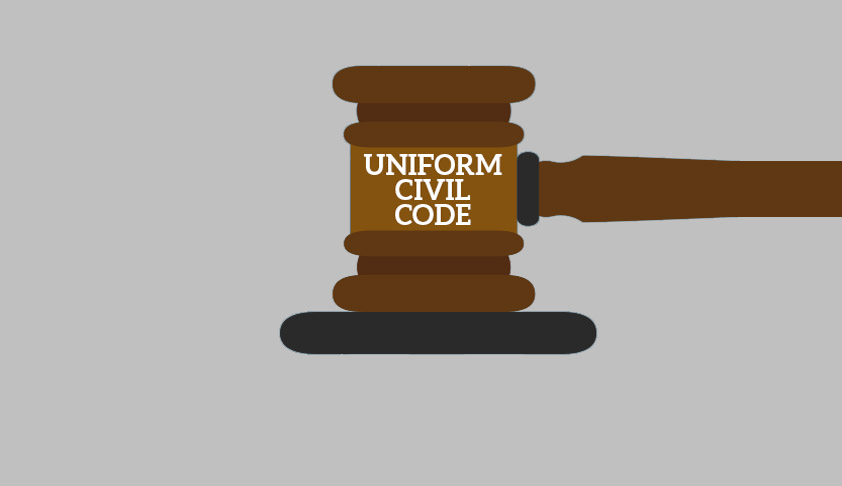 In the ongoing poll battle in five States with our polity upping the ante of identity politics to suit narrow political ends and massage their vote-banks, the maelstrom over hijab ban in educational institution in Udupi Karnataka has re-ignited buzz over implementation of Article 44 which states: The State shall endeavour to secure for citizens a Uniform Civil Code (UCC) throughout the territory of India.

Predictably, Opposition Parties, activists and academics expressing solidarity with Muslim girls bellow hijab ban violates freedom to religion and equality. Others aver it is an affront to gender justice guaranteed under Articles 14-15, dignity of women guaranteed under Article 21 which cannot be secured without implementing the UCC.

The Code divests religion from social relations and personal law like the Hindu Code Bill, Shariat law etc which are based on scriptures and customs of various religious communities. Replacing it with a common law governing personal matters: marriage, divorce, adoption, inheritance and succession for all citizens irrespective of religion, harmonising diverse cultural groups, removing inequalities and protecting rights of women thereby creating a gender-equal society.

Pertinently, the Code has been a key agenda of the ruling BJP and was included in its 2019 Lok Sabha election manifesto alongside Ram temple in Ayodhya and abrogation of Article 370 in J&K which have been fulfilled. Both Modi and Amit Shah believe no country should have any religion-based law other than a single law for citizens. Moreover, the UCC provides protection to vulnerable sections and religious minorities, while encouraging nationalistic fervour through unity.

Naturally the Opposition opposes this on the fallacious ground the UCC would interfere in personal laws of religious groups and right of religious freedom unless religious groups are prepared for change, (sic). It is a ‘minority versus majority’ issue and the Hindutva Brigade’s policy for Muslims living in India. Secularism is in danger under Modi Raj, they yell.

The All India Muslim Personal Law Board too recently expressed reservations and views it as a threat to India’s diversity. Our country has a multi-cultural and multi-religious society and each group has the Constitutional right to maintain its identity. It would encroach on our right to religious freedom, arguing the Code would lean towards Hindu personal laws.

Raising a moot point: Why should a common civil code be viewed as being anti-minority? If Hindu personal law can be modernized and a traditional Christian custom struck down as unconstitutional, why should Muslim personal law be treated as being sacred to the secular cause?

Alas, over the years deliberate distortions of religion to suit narrow personal-political agendas and vote-banks have vitiated the country, obfuscating a crucial fact that Ambedkar advocated “optional” common civil code.

During a debate in the Constituent Assembly on Article 35 (now 44) on November 3, 1948 when three Muslim members opposed the Article as it would interfere with their right to follow their own personal law, Babasaheb made two observations.  One, Muslim Personal Law was not immutable and uniform throughout India, contrary to what had been stated in the amendments (moved by the Muslims members).

Two, the Article merely proposes the State shall endeavour to secure a Civil Code for its citizens, not that after the Code is framed States shall enforce it upon all, merely because they are citizens. It is possible that a future Parliament might make a provision in the initial stage of the Code being purely voluntary.

In fact, the need for UCC has been reiterated by Supreme Court times out of number but they totaled zilch. In 2019 a BJP Rajya Sabha MP introduced a Private Member’s Bill on the Code but was stalled by Opposition on grounds it could lead to communal tensions as anti-Citizenship (Amendment) Act protests were being staged. In November Allahabad High Court urged the Centre to speed up the UCC as “it’s a necessity and mandatorily required today.”

Regrettably, in today’s politico-social reality Ambedkar’s sound advice is ignored and dismissed as a utopian hypothesis and Article 44 has remained a dead letter. As things stand both Hindus and Muslims have lost sight of the essentials of their respective religions and are largely misled by bigots and fundamentalists. Worse, even the educated are speaking the language barely distinguishable from that of Hindu-Muslim fundamentalists. Their stock answer to every critique: Religion is in danger.

Complicating matters further there are too many religious practices and beliefs governed by personal laws, and unless we as a society are ready to give up everything that we are used to, then there can be a UCC. Think. Marriage, divorce, inheritance are not concepts that can be regulated strictly by uniform laws, because they are all part of a personal lifestyle which is interwoven within religious identity.

India is a secular country. Secularism in western nations means that the State has no religion, whereas here the concept of secularism is ‘tolerance to all religions.’ This means we tolerate all religions, respect their practices and live in harmony. Such harmony does not necessarily have to come only when all of us are governed by a singular personal law.

Alas, successive Governments have failed to draw a distinction between politics, caste and religion. Forgetting, there is no mysticism in the State’s secular character. It is neither pro or anti God and is expected to treat all religions and people alike ensuring that no one is discriminated against on the ground of religion.

Where do we go from here? It all depends on whether the Government is willing to get rid of its excess baggage of isms. A consensus has to emerge among people that address their misgivings and concerns before the Code can be enacted. Said a senior Minister, “There is need to tackle “delusions” that some have “encouraged” that UCC is against rituals and core practices of any religion. “It is a scientific and modern way of achieving goals of gender justice which would help the cause of national integration by removing disparate loyalties in laws which have conflicting ideologies.”

India and its secularism deserve a voluntary UCC code for gradual acceptance without further delay. Enlightened opinion among the Muslims will then have a choice; be liberal and progressive or remain obscurantist and backward. Goa has had a common civil code for long, thanks to its Portuguese rulers. Importantly, it has been willingly accepted by all, creating a Goan identity.

Clearly, no one community should be allowed veto or block progressive legislation especially, if it is voluntary and does not seek to impose any view or way of life on anyone arbitrarily.  Time now to reject different laws for different communities, implement Article 44 and reform India. What gives?