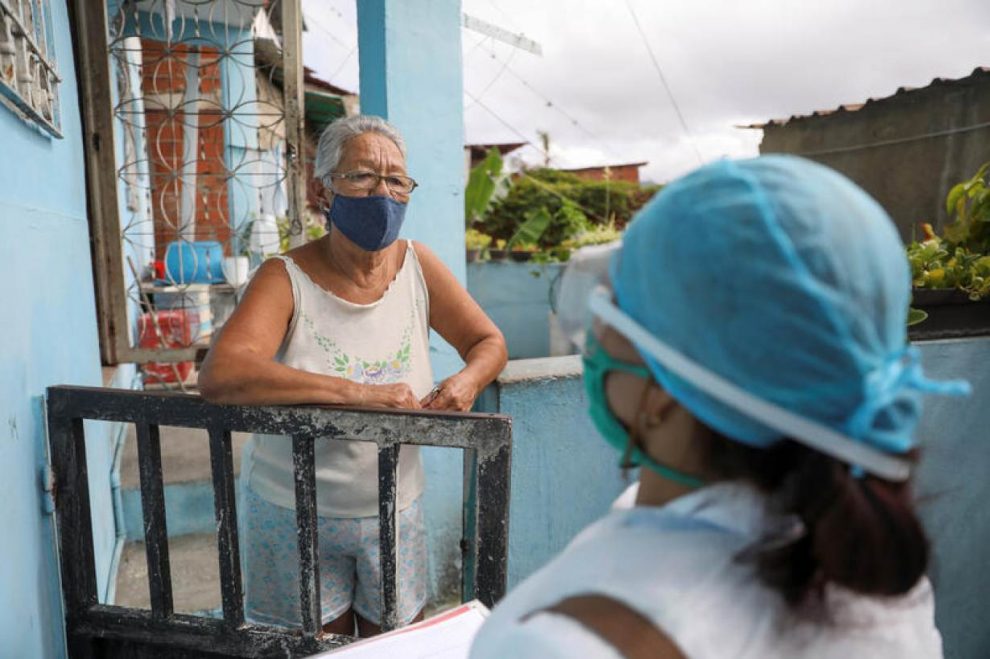 BOGOTA/NAIROBI: As an undocumented migrant living in Colombia, Venezuelan Leidi Gutierrez has little chance of getting a COVID-19 vaccination. With the death toll rising fast, the mother-of-two said all she could do was pray.

“I ask God to protect us from the coronavirus. If we get sick, I don’t know what to do. Would a hospital take us in?,” said Gutierrez, who fled a deep economic crisis in her homeland two years ago, as she begged in the Colombian capital, Bogota.

“I’ve heard about a vaccine coming but I don’t think about that. I need to feed my children,” the 32-year-old said.

As Latin American nations start to launch mass COVID-19 inoculations, after more than 500,000 deaths, rights groups fear some five million Venezuelan migrants and refugees living across the region will be last in line – or could miss out altogether.

Colombian President Ivan Duque has said the nearly one million undocumented Venezuelans in Colombia, which has registered 50,000 coronavirus deaths, will not be eligible for a vaccination when the roll-out is due to begin next month.

Offering shots to unregistered migrants would cause “a stampede” due to Venezuela’s crumbling healthcare system, he told Reuters this month, though he urged the international community to help Colombia secure vaccines for the migrants.

In the Dominican Republic, which hosts hundreds of thousands of undocumented migrants from Venezuela as well as Haiti, President Luis Abinader said vaccine shots would not be given to anyone without residency papers.

“This is not the time to leave most vulnerable migrants and refugees behind. Venezuelans must be included in national vaccine rollouts,” said Dominika Arseniuk, country director of the Norwegian Refugee Council in Colombia.

As many lower-income countries struggle to acquire enough doses and begin vaccination programs quickly, some are putting their own citizens first, said Rachel Schmidtke, Latin America advocate at Refugees International.

“A sense of scarcity (of vaccines) can breed vaccine nationalism,” she told the Thomson Reuters Foundation.

Among the most at risk from missing out on vaccination are those Venezuelan migrants on the move – many trekking thousands of miles (kilometers) across South America on foot.

“They tend to be invisible. But even if they were to be included in a vaccination program, we have to find the mechanism to sort of not lose them because many of the vaccines require a double jab,” said Jeff Wilkinson, senior operations officer at the U.N. refugee agency (UNHCR).

Aid groups worry that other undocumented migrant workers across the world, including in the Middle East, Africa and Southeast Asia, are also hard to reach and risk being left behind.

“Men can be working on construction sites and forced to live on that construction site … domestic workers can be invisible and confined to the house,” said Ezekiel Simperingham, global migration lead at the International Federation of Red Cross and Red Crescent Societies.

“If those people are already invisible from the authorities … then they are almost certainly, without a concerted effort, going to be invisible from vaccination campaigns.”

In the Middle East, researchers from human rights group Equidem Research and Consulting, said they feared many undocumented workers would not want to take the vaccine even if they were offered it by host countries.

“These countries have a history of detaining undocumented workers in poor conditions and so even if the vaccine is available, many are unlikely to come forward and take it,” said Namrata Raju, Equidem’s India director.

She said many of the undocumented migrant workers they had spoken to were “very, very scared of punitive action taken against them if they are identified as undocumented”.

While there is no official data on undocumented workers in the Gulf, Raju said there were likely hundreds of thousands of people from African and South Asian nations working in the oil-rich region without the correct permits and documentation.

In South Africa, the worst-hit African country with about 1.3 million COVID-19 cases, the vaccine roll-out has yet to begin as the nation races to fight off a new, more infectious variant.

The first doses, targeting healthcare workers, are expected to arrive by the end of January but there has been no mention of whether undocumented migrants will be included and the Department of Health did not respond to queries on the issue.

While reliable figures on undocumented migrants in South Africa are hard to access, government figures suggest there are 1.6 million people born outside of the country with most coming from Zimbabwe, Malawi, Mozambique and Lesotho.

“I’m very concerned that we will see either formal or de facto discrimination against undocumented migrants when it comes to vaccine access,” said Jo Vearey, director of the African Center for Migration and Society, a research institute.

Ensuring refugees and migrants get vaccinated is key to ending the pandemic through herd immunity, which requires a large portion of a community developing a degree of immunity to a virus either through natural infection or vaccination.

In Singapore, the junior minister for manpower Tan See Leng said last month migrant workers would receive the vaccine free of charge, just like all other citizens and long-term residents.

Cramped dormitories housing more than 320,000 South Asian low-income migrant workers account for the bulk of infections in the city-state.

In Bangladesh, where nearly a million Rohingya refugees from Myanmar live in camps rife with COVID-19, the U.N. refugee agency (UNHCR) said it was having “productive discussions” with authorities to ensure equitable vaccine access.

“Excluding Rohingya refugees from vaccination plans carries the risk of ongoing transmission in these populations, with spillovers into the national population,” said UNHCR spokesman Mostafa Mohammad.

In Jordan, a major host country for about 750,000 refugees, including many from Syria, refugees have fared better.

Last week, it became one of the first countries in the world to immunize refugees as part of a national vaccination program open to anyone living within its borders regardless of their immigration status, according to the UNHCR.

Antonio Vitorino, director general of the U.N.’s International Organization for Migration, said including migrants in vaccine drives was vital.

“As the secretary general of the U.N. has said: Nobody’s safe until everybody is safe,” he said.