Home Newsfeed Internet suspended in 21 UP districts, security beefed up 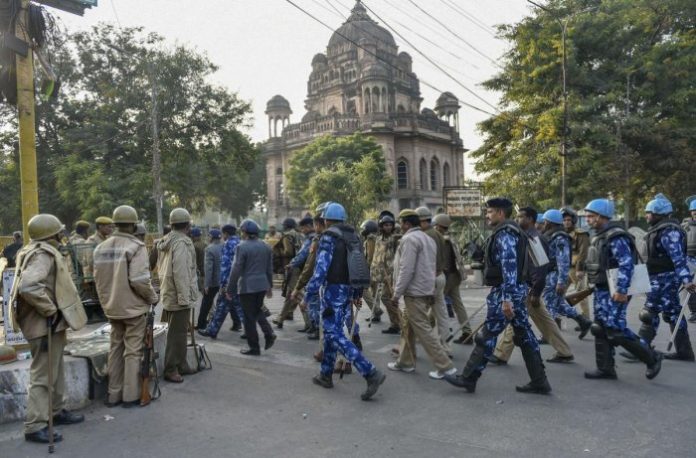 The administration in Uttar Pradesh has beefed up security and intensified patrolling to ensure peace ahead of the Friday prayers. The authorities have also suspended internet services in 21 districts.

The measures have been taken keeping in mind the widespread violence that hit the state last week during protests against the amended citizenship law, leaving 19 dead.

“Law and order situation is absolutely under control, we continue to have strategic deployment of forces, Special Investigation Teams formed to investigate cases. We have suspended internet services in 21 districts,they will be restored as and when situation demands,” said OP Singh, Uttar Pradesh DGP.
As a precautionary measure, internet services, that were resumed after nearly a week, were suspended again in Ghaziabad, Bulandshahr, Meerut, Muzaffarnagar and Shamli.

Paramilitary force personnel and state police force will be deployed and drone cameras will be used in some cities to ensure security on Friday, officials said.
Protests against the Citizenship (Amendment) Act took place in other cities too, including in national capital New Delhi, resulting in some incidents of arson and several people being detained, but the ones in UP were violent.

UP police initially claimed that it was the protesters who fired bullets which led to deaths and injuries, it later admitted to firing in Bijnor where one people had died.

In Lucknow, inspector general (IG) of police, law and order, Praveen Kumar said the situation was normal across the state, but the police force is on high alert. Kumar said district police chiefs were asked to communicate with Muslim clerics and other religious leaders and hold peace committee meetings with local groups. He said additional policemen had been deployed in some districts to ensure a peaceful Friday.

A conference – attended by religious leaders of different faiths – was held in the UP capital on Thursday. Maulana Khalid Rashid Farangi Mahli, the Imam of Aishbagh Eidgah – where the conference was held – said, “Violence is not a solution to any problem. Things can be resolved though dialogue.” He said the state should hold discussions to resolve the issues that have led to largescale violence across the state.

Additional Director General (ADG) Prashant Kumar on Thursday said that 317 people have been arrested and 79 cases registered in connection with the violence during the anti-Citizenship Amendment Act (CAA) protests in Meerut.

In the entire state 1,113 persons have been arrested for their alleged involvement in violence.

Students and other groups are protesting against the act which grants Indian citizenship to refugees from Hindu, Christian, Sikh, Buddhist and Parsi communities fleeing religious persecution from Pakistan, Afghanistan, and Bangladesh, who entered India on or before December 31, 2014.