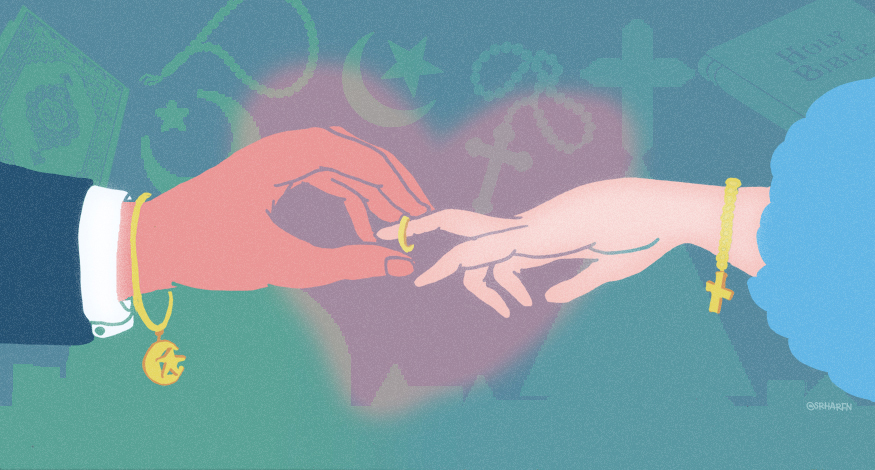 Uttar Pradesh, Madhya Pradesh, Haryana and Karnataka are in the forefront keen on enacting a   law against conversion via love marriage. Though anti-conversion laws are in force in many States against using inducements or force for religious conversion, the present move has drawn wide attention because of its link with love and marriage which are personal matters. UP has already promulgated an Ordinance on Unlawful Conversion of Religion. This has been challenged in the Allahabad High Court.

‘Love jihad’ is considered by some as an “Islamophobic conspiracy theory” that accuses Muslim men of targeting non-Muslim women for conversion to Islam by feigning love. In recent times, it was first noticed in 2009 in Kerala – the State where 26.56% of the population is Muslim and which has much closer contact with the Middle-East Islamic countries than other States. Soon, Karnataka reported similar cases and more States followed. It gained national importance very quickly, as more reports of inter-religious marriages with extraneous motives came from many places in India.

‘Love jihad’, also nicknamed as ‘Romeo Jihad’, it is said, was also spreading to Myanmar, Pakistan and the UK during 2009 and 2014. It is reported that the Sikh Council received accounts from girls from British Sikh families falling victims to ‘love jihad’.

Historically, however, this phenomenon is not unknown. The same fear of conversion following pretended love and fake marriage was felt in the 1920s without any particular name. Riots occurred in some places over abduction of Hindu women and their forced conversion to Islam.  A historian mentions about such cases in Kanpur and Mathura.

The term ‘love jihad’ was used by the Kerala High Court in 2009 when it ordered joint investigation by Karnataka and Kerala police into ‘Love Jihad Movement’.  It related to a habeas corpus petition filed by parents of an adult woman who had married a Muslim man and subsequently converted to Islam.

The term ‘love jihad’ became popular in 2007 when a Hindu fringe organisation Hindu Janajagruti Samiti in Dakshina Kannada of Karnataka and parts of northern Kerala carried on campaigns against it. It was said that Muslim boys were given training for the job of making false love with a view to converting girls and effectively adding to Muslim population.

A plea in Allahabad High Court challenges UP Government’s Ordinance of 11 December on ‘love jihad’ – a term used to discredit marriages between Muslim men and Hindu women. The Ordinance that has raised huge controversies contains several issues that have to be settled by courts. It is not solely a clash between unlawful conversions and a civil right of every citizen pertaining to private life.

The Ordinance promulgated by the UP Government prohibits a person from converting the religion of another through marriage. It enables any person related to the converted person by blood or marriage or adoption to lodge an FIR against conversion. It empowers courts to declare any marriage as void if it is performed for the sole purpose of unlawful conversion or if unlawful conversion is done for the sole purpose of marriage. It is a cognizable and non-bailable offence punishable with imprisonment of up to 10 years and a fine of up to Rs.50,000 under different categories.

Allahabad High Court in its verdict on 11 November stated that: “The right to live with a person of his/her choice irrespective of religion professed by them, is intrinsic to right to life and personal liberty.  Interference in a personal relationship would constitute a serious encroachment into the right to freedom of choice of the two individuals”.

The concept of ‘love jihad’ has more serious social concerns and political impact than marital relations and family life. In India where religious conversion is mixed up with politics and treated as a political problem because of wide use of religion in elections, conversion through marriage has become a major issue. Therefore, arguments regarding right to love and right to choose one’s marriage partner seem very elementary. The dispute is not about genuine love and marriage, but about conversion that accompanies by force or fraud or inducements. The fear is about demographic transformation with all its consequences imposed by calculated human intervention upsetting population structure.

Further, discussions point to some terror organisations using ‘love jihad’ as a tool to convert innocent Hindu women –an aspect overlooked by champions of right to love, but needs investigation as part of our fight against terrorism.

The right to propagate religion guaranteed in the Constitution does not include the right to convert in the words of the Supreme Court uttered in 1977 which upheld the Freedom of Religion Acts of Madhya Pradesh and Odisha. These early laws did not bar conversion by marriage.

Love and marriage are private matters protected by the Constitution as a person’s fundamental right. ‘love jihad’ laws openly clash with the right to privacy whatever may be the provocation for the laws or the justification for interference with that right. A landmark judgement was delivered unanimously by a 9-judge bench of the Supreme Court on 23 August 2017. It thoroughly analyses the concept of privacy and implications of the right to privacy and records multiple opinions and various facets of privacy that are presented in arguments thus making it almost the ultimate word on the issue.

The unanimous judgement holds that privacy is a “concomitant of an individual’s right to exercise control over his own personality and finds its origin in the notion that certain natural or inherent rights are inseparable from human personality”.  It confirms that like other rights under Fundamental Rights, it is also not “absolute” and its violation must, besides the test of due process and procedure, a factor in legitimate State interests.

Elaborating on the right to privacy, the verdict reminds us that it imposes a duty on the State to protect the privacy of individuals. As the court noted, this duty involves the liability that is to be incurred by the State for intruding into the right to life and personal liberty which are inalienable to human existence. These rights are not granted by the State or created by the Constitution and cannot be taken away by the State.

The Supreme Court approached the issue as rights and privacy centred and not from the possibilities of bogus marriages for various illegal purposes. Those keen on ‘love jihad’ legislation seem to be concentrating solely on illegal motives that are working and disrupting peace and harmony. Thus, there is a fundamental difference between pro and anti ‘love jihad’ groups about the problem itself and their objectives. Religious conversions are already subject to several restrictions which can be enlarged if necessary in the context of increasing cases of involuntary inter-faith marriages. Every citizen has got the right to change his religion according to his free will, but no religion has got right to make forcible conversions. The right to propagate religion does not include the right to convert others to one’s faith. Inter-faith marriage used as shortcut to conversion is misuse of right to private life.

All praises for ’empowerment’
Imtiaz Ali in Jammu
Comment