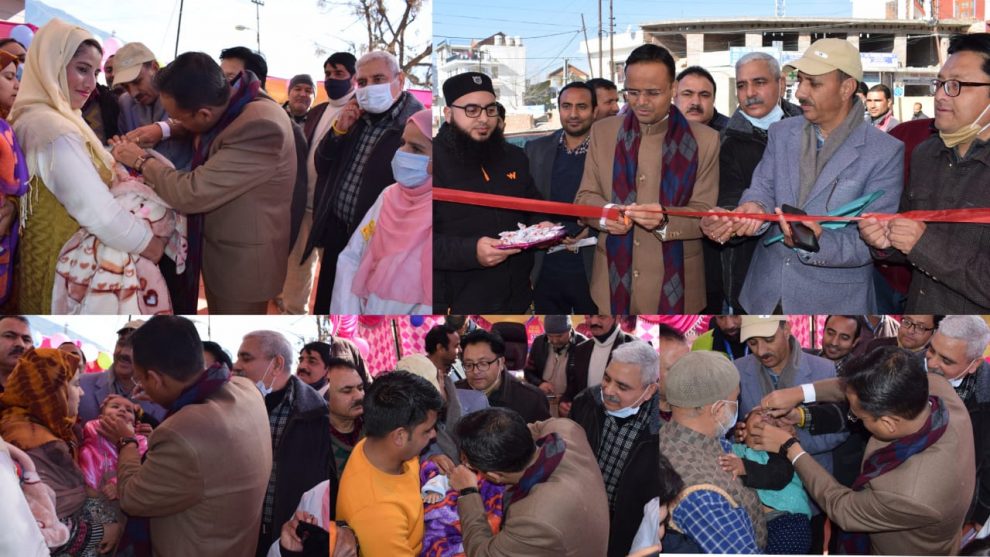 Door to Door campaign follows in next 2 days

Deputy Commissioners, Ashok Sharma launched the campaign here at District Hospital to immunise about 42,025 children below the 5 year age in the district.

“For the hassle free pulse polio programme about 368 polio booths have been established across the district to inoculate all children below 5 year. This will be followed by two day door to door targeting of the beneficiaries especially in remote Marwah, Warwan , Dachhan, Paddar  and other areas of district ”, said DC, while speaking on the occasion.

He further informed that 1481 employees of Health, ICDS and Education department have been engaged for Booth level and house to house targeting of the beneficiaries for 100 percent coverage.

The DC said the 3-day drive will cover as many as  10,1706 children below 5 year  age for which 580 booths have been established across the district.  He further informed that a total of  2320 officials are detailed to  undertake this extensive exercise. He said 112 High Risk Area have been identified besides 10 mobile teams, 14 transit teams, 116 supervisory Staff, ASHA and Anganwadi workers have been  deputed for achieving  100%  immunization target in the district. .

The DC said that   during the 3 –day drive, about 71000 children of the targeted age group will be immunized at 523 Polio booths. He said 105 Supervisors, 2124 Anganwari Workers, ASHA workers, officials from health and education department have been engaged for this service to make the programme a success.

Speaking on the occasion, the DC asked the concerned officers of the Health Department to work in a mission mode and with added zeal to ensure the 100% coverage of the children under the programme in the next two days.

He informed that a total 81385 children  will be administered oral polio vaccine  at 426 vaccination booths set up in the district and door to door visit in the next two days. He further informed that 1708 workers and 85 supervisors have been deputed to man the booths and ensure absolute coverage.

Speaking on the occasion, the DDC said that the drive was simultaneously  launched in all the subdivisions of the district and asked the concerned officers of the Health Department to work in a mission mode  to achieve 100% coverage of the children.

The DDC directed the concerned officers to ensure that all the COVID19 protocols are followed while carrying out different activities related to the programme to avoid the risk of infection.

The Chief Medical Officer informed that Oral Polio Vaccine will be administered to 109335 children at 644 vaccination booths set up in the district. She further informed that 2556 workers and 127 supervisors have been deputed for ensuring absolute coverage.

Speaking on the occasion, the DC said that 436 vaccination booths have been established across the 4 medical blocks of the district including Gool, Ukhral, Batote and Banihal with a deployment of 1740 team members, 82 supervisors and officials of different departments.

Besides, 50 mobile and transit teams comprising Supervisory, Teacher, Health Worker, ASHA and Anganwadi workers were engaged for proper execution and monitoring of the immunization process.

Similar drive was also carried out in far-flung and snow bound areas of district like Mahu and Mangit of Banihal block.

Later, the CMO disclosed that 90.34% (60052 children) out   of 66472 upto 5 year age were administered polio vaccines and the rest of children will be given polio drops at their places on February 1st and 2nd.