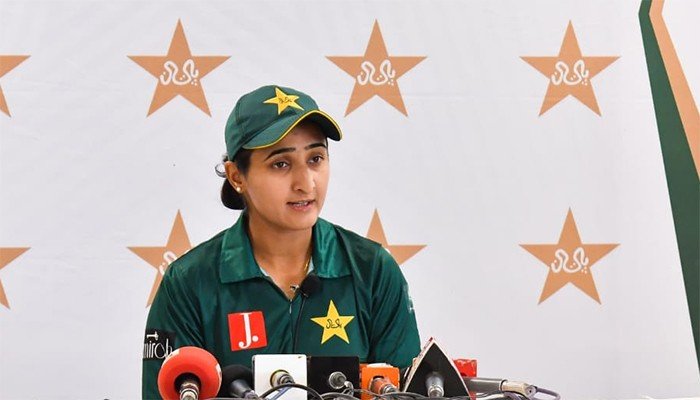 The Dispatch Staff
Add Comment
Our aim is to make it to the semi-finals, something which we have never done before. I strongly believe that this side has all the ingredients to achieve that. Being the senior most player and the captain of the team , she feels that it is her duty to lead from from example.

New Delhi: Pakistan captain Bismah Maroof sees their Women’s World Cup opener against India as an opportunity to inspire “millions of girls” in both countries to take up the sport.
India are set to face Pakistan in their opener of the World Cup on March 6 at Tauranga, New Zealand. The quadrennial event will be held from March 4 to April 3 across six cities in New Zealand.

Pakistan vs India is indeed a great stage for any player to establish her credentials, but at the end of the day, it is a cricket match that has to be won by executing the basics right and keeping thing simple,” Maroof, who is making a comeback after motherhood, told PTI Bhasha from Queenstown, New Zealand.

This match is a great opportunity to inspire millions of girls in Pakistan and India to take up this sport as a profession. It is the biggest rivalry, and attracts innumerable eyeballs.

“I hope girls in the two countries will watch this match and will be inspired to take up the game,” said the 30 year old who has played over 200 international matches for Pakistan.

She praised the Mithali Raj led Indian team but she is very optimistic about Pakistan’s chances against them.

The Indian team is a good unit and has done well recently. They also have had some very good youngsters coming in of late, she said.

Our aim is to make it to the semi-finals, something which we have never done before. I strongly believe that this side has all the ingredients to achieve that. Being the senior most player and the captain of the team , she feels that it is her duty to lead from from example.

“Being the senior player and the captain of the side you have to inspire your team and lead by example. If you are not doing the right things, you cannot demand them from girls. I have a very clear vision with this team that we need to be in top four.”

When asked about the team composition she said that conditions in New Zealand will determine the playing eleven.

Having seen many ups and downs in her journey so far, she had once decided to quit cricket to embrace motherhood.

It has been an incredible journey and I have thoroughly enjoyed it. Being a cricketer has designed my life and played a very important role in the person I am today. There have been ups and downs, which have made me learn , she said.

I am very excited to be back. It feels like I am making my debut again for Pakistan. I am grateful to my family, especially my husband who has supported me immensely throughout this phase. I also want to mention the support that the Pakistan Cricket Board has provided me through the parental policy, said Maroof .

To make a successful comeback after motherhood is not easy and Maroof has worked very hard to regain that level of form and fitness.

“The journey from childbirth to getting here had its fair share of difficulties, as I had to start from scratch to regain my fitness. Women don’t often return to sports or continue their professional careers after getting married or childbirth.

“I spent a lot of time doing strength and conditioning sessions at the National High Performance Centre in Lahore.” PTI MJ